Virat Kohli smashed his 28th ODI ton as India beat the West Indies by eight wickets in the fifth ODI to clinch the five-match series 3-1. 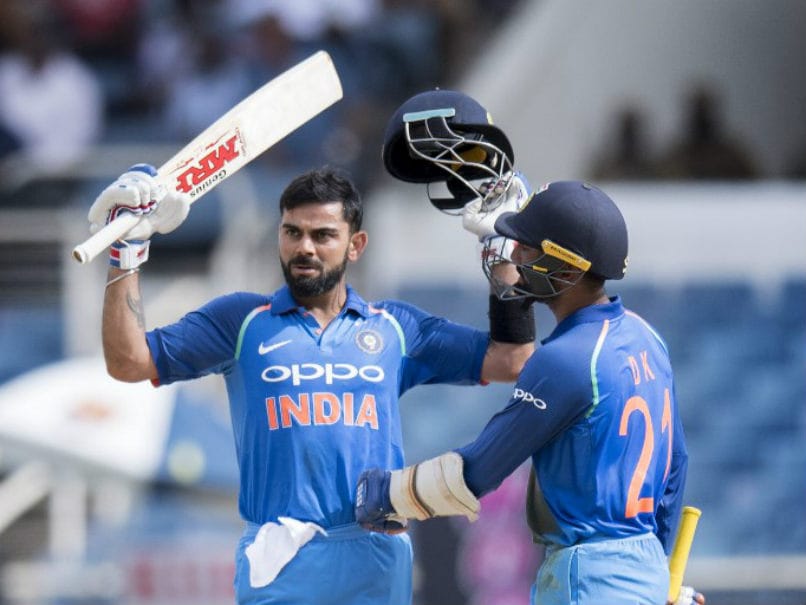 Virat Kohli is called a run-machine for a reason. He rarely disappoints with the bat, and when it comes to chases, there is no one better. In January 2017, Kohli broke Sachin Tendulkar's record for most centuries in successful chases in ODIs and now the Indian skipper has once again gone past the Indian batting legend for most hundreds in the 50-over format while chasing, irrespective of whether India won or lost. Kohli produced a batting masterclass to slam his 28th ODI ton in the fifth and final ODI against the West Indies at Sabina Park in Kingston. It was his 18th century in a chase, going past Tendulkar's record of 17.

However, the difference between the two stalwarts, when it comes to chasing, is stark. While Kohli has taken just 102 innings to reach 18 centuries, Tendulkar took 232 innings to score 17 hundreds.

Third in the list is Tillakaratne Dilshan, who scored 11 centuries in 116 innings while batting second.

The Indian skipper was in mouth-watering form in the fifth and final ODI against the West Indies. After Mohammaed Shami and Umesh Yadav had done the damage with the ball to restrict the hosts to 205 for nine, Kohli took centrestage to blow the Windies away.

India lost Shikhar Dhawan early in the chase. Kohli along with Ajinkya Rahane steadied India after the early loss. Kohli was circumspect to start with but soon started flexing his muscles as India started getting closer to the target.

Post Rahane's dismissal, Kohli was joined by Dinesh Karthik and the duo strung together an unbeaten 122-run stand as India reached the target with 79 balls to spare and eight wickets in hand.

India's comprehensive win helped them clinch the five-match series 3-1. The focus will now shift to the sole Twenty20 international to be played on Sunday.

Comments
Topics mentioned in this article
India Cricket Team West Indies Cricket Team Virat Kohli Sachin Tendulkar Tillakaratne Dilshan West Indies vs India 2017 Cricket
Get the latest updates on India vs South Africa and check out  Schedule, Results and Live Score. Like us on Facebook or follow us on Twitter for more sports updates. You can also download the NDTV Cricket app for Android or iOS.