Highlights, India vs West Indies: Mohammed Shami was the pick of the Indian bowlers, taking four wickets for 48 runs in his 10 overs. 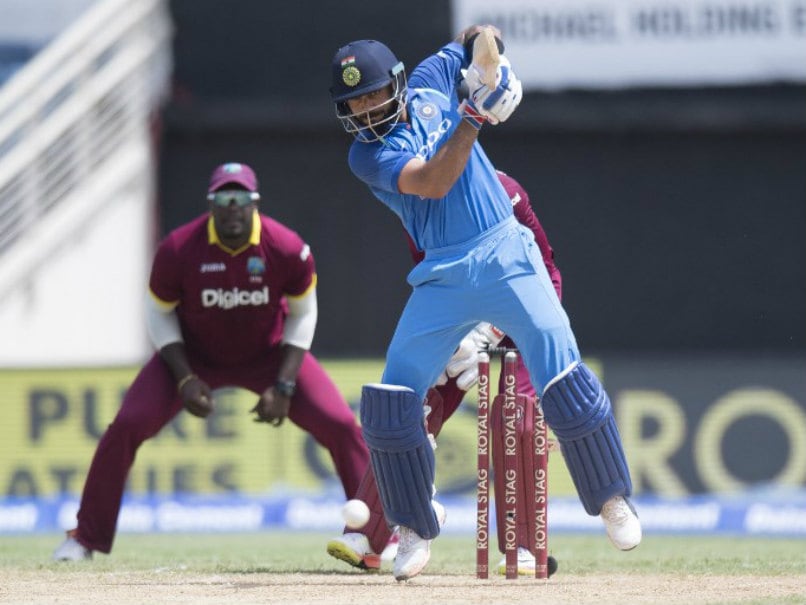 Riding on Virat Kohli's record ton and Dinesh Karthik's fifty, the Indian players made amends to their loss in the previous game with a solid performance in the fifth and final one day of the series at Sabina Park on Thursday to clinch the series in style. There was a lot of hue and cry after India's poor performance against the second string side of the hosts, but not only the batsmen, the bowlers too were intimidating enough to take the team home with eight wicket victory to seal the five-match series 3-1.

Earlier, Mohammed Shami and Umesh Yadav starred for India as hosts West Indies were restricted to 205 for nine in the fifth and final ODI at the Sabina Park on Thursday. The West Indies got off to a solid start courtesy Evin Lewis and Kyle Hope but kept losing wickets in groups. Shai Hope (51 off 98) top scored for the West Indies. Skipper Jason Holder hit a breezy 36 to put Indian bowlers under pressure but the visitors kept pegging away at the wickets. Shami was the pick of the Indian bowlers, taking four wickets for 48 runs while Umesh chipped in with three. Hardik Pandya and Kedar Jadhav took a wicket each. (Scorecard)

Catch highlights of the match between India and West Indies straight from Sabina Park, Kingston.

02:53 IST:Good to see happy faces lifting the winner's trophy. That's it from us. Hope you enjoyed our coverage.

02:50 IST: Virat Kohli, Man of the Match:First and foremost, the aim was to win the series. Some special performance from the boys and special mention to Rahane who has been consistent throughout the series. Today was another clinical performance from us. Something we want to do on a regular basis. Two failures in the last 2 games, I never look at stats and numbers. I always look at the scoreboard and focus on what I need to achieve. I like playing with the tempo of the game. Partnerships help. DK and Rahane have been excellent. If you carry 15 or 16 members in the squad, it's important to believe in them. People are grabbing their opportunities. I have always been a batsman that played the situation and that never changed. I still think the same way. I'm relishing the opportunity.

02:20 IST: SIX!! Virat Kohli tonks it and finishes the match in style. India win the five-match series 3-1and the man who made this possible is none other than Virat Kohli himself. What a way to finish  the match.

02:12 IST: Virat Kohli goes past the legendary Sachin Tendulkar to hold the record of most number of centuries while chasing in ODI cricket.

02:00 IST: FOUR!!Through the gap this time and Karthik will get a boundary

01:59 IST: Karthik pulls it firmly for two runs. Didn't have complete control but he picks the gap through mid-wicket

01:45 IST: Nicely played on the up and what timing by the Indian captain. He gets a couple

01:31 IST: FOUR!Kohli seems to be in a hurry now. He gauged the length early and played it towards covers for a boundary

01:28 IST: FOUR! Too short from Alzarri Joseph and Dinesh Karthik flays it over backward point for a boundary. He is on a move now

01:26 IST: FOUR!Quicker delivery by Ashley Nurse and Kohli is too smart to judge that.

01:17 IST: FOUR!! Now Karthik gets into the attack and drives Nurse for a boundary

01:14 IST: SIX!! Virat is in a mood to finish it early. He hits it over the long on boundary for a maximum.

01:06 IST: Karthik has had a wonderful domestic season and that's why he is playing purely as a batsman.

01:05 IST: FOUR! What a shot. Karthik goes on the backfoot and quickly latches on to it for a boundary.

01:01 IST: FOUR! Kohli picks that slower one early and lofts it over mid-on for a boundary

00:59 IST: New batsman Dinesh Karthik gets off the mark straightaway

00:56 IST: OUT!!Thuds into Rahane's pads and the umpire raises his finger after a loud shout by Devendra Bishoo. The opener goes for 39

00:48 IST: FOUR!!Williams drifts down the leg side and Kohli flicks it for a boundary with ease

00:44 IST: Rahane comes down the track but the inside edge of the bat saves him. Frankly, there was no need of that shot.

00:31 IST: 50 runs partnership between Kohli and Rahane. India are playing positive cricket today unlike the last game where they went into a shell and failed to chase down a meager total of 190

00:25 IST: Double change in bowling by West Indies. Kesrick Williams to bowl from the other end.

00:22 IST: Leg-spinner Devendra Bishoo comes into the attack. It will be interesting to see how he bowls.

00:15 IST:Kohli drives it hard and misfield by the West Indies captain. He gets two runs

00:09 IST: FOUR! Kohli uses the pace of the ball and swings it for a boundary

00:08 IST: FOUR!!Kohli comes into the attack now. He drives on the up past the bowler and mid-off would only fetch the ball from the fence

00:07 IST: FOUR!!Third boundary of the over. Rahane is already making Windies pay for the drop catch.

00:05 IST: FOUR!!Rahane again plays it late and glances it down towards fine leg.

00:01 IST: FOUR!! Lovely use of the wrists by Rahane. Goes past mid-on fielder for a boundary

23:58 IST: Chance!! Rahane slashes it hard but Bishoo drops it at point. Windies captain Holder is not happy.

23:56 IST: Rahane plays it late and flicks it towards mid-wicket. He gets two runs

23:48 IST: OUT!! Straight to the fielder at short cover and Joseph draws first blood for West Indies. Shikhar Dhawan goes to the pavilion in the first over itself.

23:45 IST: Good carry there  but Rahane glides it towards the third man area for a single

23:40 IST: Ajinkya Rahane and Shikhar Dhawan are at the crease. Alzarri Joseph to start the proceedings for West Indies

23:35 IST: Welcome back!! So, India need 206 runs to win to seal the series. Remember, India couldn't chase 190 in the last game in Antigua. My gut feeling, India should be able to score this in 44 overs. Getting over enthusiastic, may be.

22:47 IST: Six!!Powell clears his leg and smashes Shami over long-on. What a hit!

22:35 IST: Four!!Edge from Bishoo and the ball runs away to the third-man boundary.

22:28 IST: Dropped!Dhoni puts a catch down -- the most unlikely person to drop one. Unlucky for Kuldeep!

22:25 IST:West Indies are loosing wickets once again in a bunch.

22:07 IST: Four!!Holder starting to flex his muscles. Comes down the track and smashes Shami over covers.

21:58 IST: Six!!Short arm jab from Holder and it goes over the mid-wicket boundary for the first maximum of the match.

21:55 IST: Four!!Holder gets down on one knee and reverse sweeps Kuldeep for a boundary.

21:41 IST: Four!!Holder slogs Jadeja to the boundary, a much-needed one for the West Indies.

21:28 IST:Jadeja has given anything away today. just 20 runs from his 8 overs so far. Excellent stuff from the left-armer.

21:11 IST:Great fielding from Umesh in the deep. Saves two runs and his super throw almost results in a run-out!

21:04 IST:Spinners managing to keep the Windies batsmen in check. No freebies for the hosts. Run-rate is dropping! West Indies are 90/3 in 22 overs.

20:55 IST:Kuldeep Yadav into the attack.

20:45 IST: WICKET! Big shout for LBW!!Very next ball Umesh has trapped Roston Chase plumb in front for a golden duck. Chase asked for a review but turned out to be a poor decision.

20:40 IST: WICKET!!Hope goes for another boundary shot, connects well but finds Dhawan at short mid-wicket. West Indies are 76/2 in 15.5 overs.

20:39 IST: Back to back fours for Kyle Hope!Umesh once again the culprit for spraying it all over the place.

20:35 IST:Jadeja into the attack. Spin for the first time in the match.

20:31 IST:Windies are rotating the strike well and picking the odd boundaries.

20:26 IST: Four!!Half-volley on stump from Pandya and Shai Hope drives it brilliantly.

20:20 IST:Windies doing a good job here. Despite losing Lewis, they have not stopped attacking.

20:15 IST: Back to back fours!!Hope is looking good here. First one was short and wide while the second was beautifully straight driven. Windies are 49/1 in 10 overs.

20:07 IST: WICKET!!Pandya strikes for India as Lewis lobs a simple catch to Kohli at mid-off.

19:58 IST: Four!!Umesh again strays on to the legs and is once again flicked through square. Just poor bowling from the Indian pacer.

19:55 IST: Four!!Shami get some inswing and Hope expertly clips it past the square fielder.

19:54 IST:Shami is keeping things tight from one end but Umesh has been spraying it all over the place today.

19:50 IST: Four!!Again short and wide, and the same result. Umesh is all over the place today so far.

19:48 IST: Four!!Poor bowling from Umesh. Short and wide, and Hope cuts it brilliantly.

19:46 IST:Shami cuts Hope in half with a brilliant in-swinger, which narrowly misses the off-stump.

19:41 IST:Lewis punches off the backfoot, through the covers and gets three runs for his effort.

19:40 IST:Pandya comes into the attack to replace Shami.

19:36 IST:The Indian pacer overcompensates and provides too much room and Hope puts it away for a double.

19:35 IST: Four!!Umesh strays on to the pads of Kyle Hope and is clipped for a boundary, first of the match.

19:25 IST: All set as the Windies openers walks out. Shami has the new ball in his hand.

18:55 IST: STAT ATTACK:India have lost the last four ODIs they have played on this ground while the West Indies have won nine out of their last 10 games here.

18:50 IST:A win for the Windies will see them draw the five-match series 2-2 while a win for India will help them secure a 3-1 series win.

18:45 IST: Hello and welcome to the live blog of the fifth and final match between India and West Indies. The series is on the line today despite India looking the better of the two sides. The hosts stunned the Men in Blue in the fourth ODI and the visitors will be gunning for revenge and looking to seal the series.

Ravindra Jadeja too played an atrocious shot, resulting in his dismissal, which exposed India's tail to a crunch situation. The top order, led by Shikhar Dhawan and Ajinkya Rahane, who has hit four half-centuries in a row, has done the bulk of scoring and India would need the two batsmen to continue in the same vein. It won't be a surprise if captain Virat Kohli, who minced no words in criticising his team's shot selection, brings about changes in the middle-order.