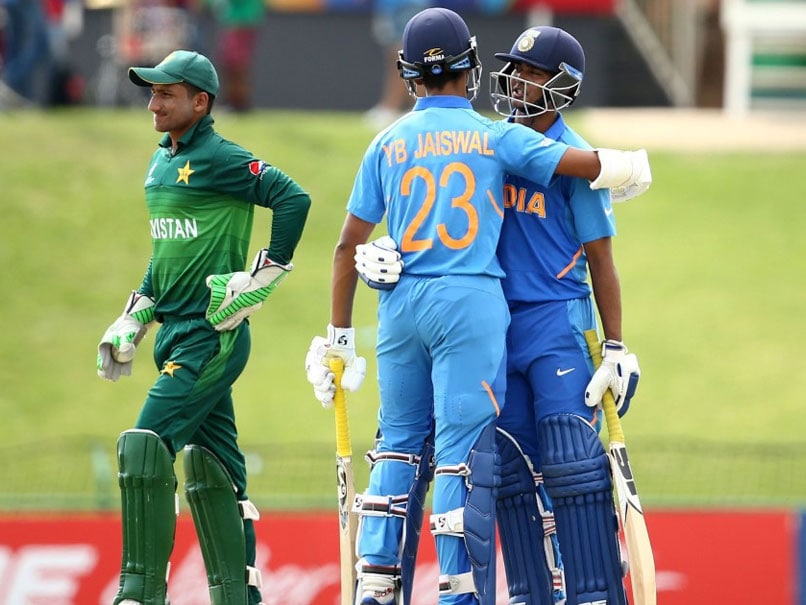 Yashasvi Jaiswal's unbeaten hundred and Divyansh Saxena's gritty fifty helped India completely decimate Pakistan by 10 wickets in the semi-final and book a place in their third successive final of Under-19 World Cup at Senwes Park, Potchefstroom on Tuesday. Chasing a modest 173 to win, both the Indian openers started cautiously and saw off the early danger from the opposition bowlers. Although they didn't score at a rapid pace in the first powerplay, they  ensured that they didn't lose any wickets. However, in the next five overs, the duo changed gears and added 25 runs. Pakistan bowlers failed to make any inroads and India cruised to an easy win. Earlier, Indian bowlers proved Pakistan skipper Rohail Nazir's decision to bat after winning the toss wrong, picking up up two wickets in the first powerplay. India's pace bowling duo of Sushant Mishra and Kartik Tyagi troubled the Pakistani batsmen with their pace and bounce throughout and were the pick of the bowlers. Mishra was the most successful of the lot as he took three wickets while Tyagi also chipped in with two wickets. Leg-spinner Ravi Bishnoi was another standout performer for the side as he picked up two wickets in the middle overs. (INDIA vs PAKISTAN SCORECARD)

Pakistan U19 Yashasvi Jaiswal Priyam Garg Ravi Bishnoi Akash Singh Kartik Tyagi Under 19 World Cup 2020 India Under-19 vs Pakistan Under-19, Super League Semi Final 1 Live Blogs Live Score Live Cricket Score Cricket
Get the latest updates on India vs Australia and check out  Schedule, Results and Live Score. Like us on Facebook or follow us on Twitter for more sports updates. You can also download the NDTV Cricket app for Android or iOS.