Serena Williams is on the verge of making more history as the seven-time champion aims to become the first mother to win Wimbledon since 1980. 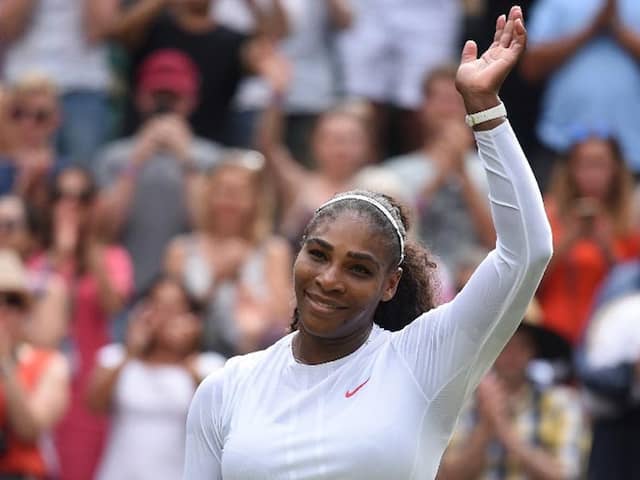 When Serena Williams was lying on a hospital operating table in the agonising hours after her daughter's birth last year, it was hard for the American icon to think about picking up a racquet again -- let alone returning to the Wimbledon final. Yet just 10 months later, Serena Williams is on the verge of making more history as the seven-time champion aims to become the first mother to win Wimbledon since 1980. When Serena walks onto Centre Court to face Angelique Kerber in Saturday's final, it will mark the culmination of an incredible journey that serves as a testimony to the 36-year-old's determination and belief.

And, while there were plenty of doubters when Williams spluttered in the first matches of her return to action earlier this year, somehow it was never in doubt that this latest chapter in Serena's life would have a happy ending.

"It's like, come on guys, this is pretty awesome. To hear people say, 'Oh, she's a favourite' - the last 16 months, I've played four tournaments, and was carrying another human half that time. It's interesting," Serena said of her Wimbledon run over the last fortnight.

Given her array of interests away from tennis, it would be understandable if Serena was ready to bring down the curtain on her career to focus on the joys of motherhood and her relationship with husband Alexis Ohanian.

But, at a time when so many of her peers have long since retired, Williams is still pushing her body through the gruelling hours of training and practice required to repel the challenge from players often half her age.

Twenty years after making her Wimbledon debut as a precocious teenager and 16 years since she clinched her maiden title at the All England Club, Serena remains virtually unstoppable on grass.

Arguably the greatest female player in tennis history, Williams is a 23-time Grand Slam champion who transformed her sport forever.

It's all a long way from the pitted courts, sometimes missing nets and with gunshots audible nearby, of Compton in Los Angeles, where Williams practised with sister Venus from the age of five.

The youngest of five daughters, Serena was drilled intensely by her father Richard Williams, who was happy to let schoolchildren hurl insults at his girls as they played.

"Criticism can bring the best out of you."

Richard and Oracene Williams moved their family to Florida in the early 1990s, seeing their daughters needed more specialist coaching, with Serena already an outstanding junior.

She turned professional in 1995, at the age of just 14. Two years later, she was in the top 100 and in January 1998 made her Grand Slam debut at the Australian Open.

She has been at the top for a generation, since she beat Martina Hingis aged 17 in the 1999 US Open final.

Amidst all the glory, Serena and Venus -- a five-time Wimbledon winner -- have still been dogged by controversy and tragedy.

In 2003, their eldest sister Yetunde Price was shot dead in Compton.

And, as two of the few black players on the tennis tour, Venus and Serena have sometimes been at odds with their peers.

Besieged by allegations that results of matches between the pair were "fixed" by Richard, the situation became ugly at Indian Wells when Venus withdrew injured just before her 2001 semi-final against Serena.

Playing the next day in the final against Kim Clijsters, Serena was loudly jeered, while Richard claimed he was racially abused.

But, after a troubled period when a serious foot injury and her affection for the celebrity lifestyle seemed to have taken its toll, Serena has been reinvigorated in the twilight of her career.

"I was expecting a few more baby steps myself. Every time I go out there, I want to take a giant step forward," Serena said when asked if she had surprised herself by making the final.

Yet, for all her astonishing achievements, winning Wimbledon with a baby in tow would be arguably her greatest moment.

Comments
Topics mentioned in this article
Serena Williams Angelique Kerber Tennis
Get the latest Cricket news, check out the India cricket schedule, Cricket live score . Like us on Facebook or follow us on Twitter for more sports updates. You can also download the NDTV Cricket app for Android or iOS.