Serena Williams took to Instagram to share a few pictures from her on-court session with her daughter Olympia. 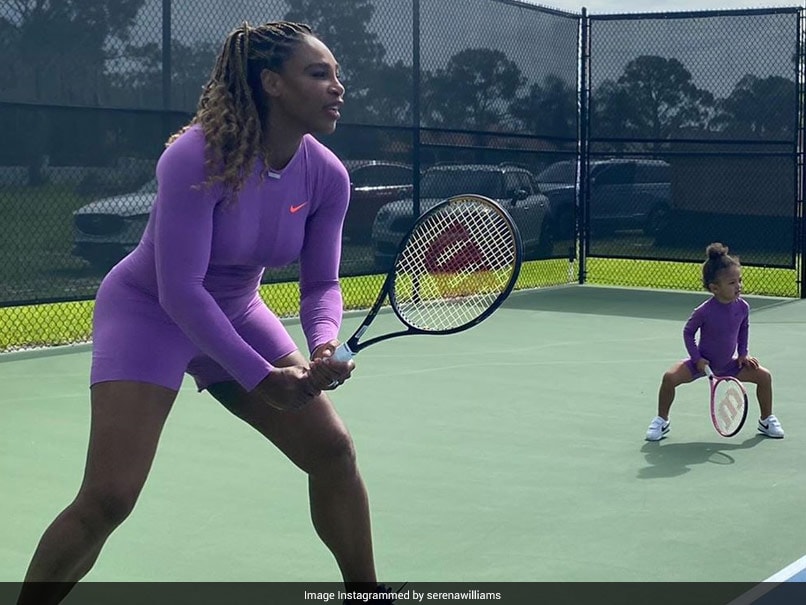 Serena Williams, American tennis star, who was last seen in action during the Fed Cup in February, took to Instagram to share a glimpse of her new 'doubles partner' -- her two-year-old daughter Alexis Olympia Ohanian Jr. Serena and her daughter took to the court, sporting similar outfits. Along with a few photos, Serena also posted a video where the mother-daughter duo signs off with a high-five. Soon after the 23-time Grand Slam winner shared the post, various sports stars were left in awe of the mother-daughter combo. Former world number one tennis player from Denmark, Caroline Wozniacki called the duo the "cutest thing" while NBA star Dwayne Wade wrote: "If this isn't the cutest thing I've seen".

"Oh my gosh!!! This is the cutest thing I have ever seen," Wozniacki commented.

Caption this (MUST SWIPE RIGHT)

Serena's sister and four-time Olympic gold medallist, Venus Williamsalso expressed her love for her sister and niece and wrote , "I just love her and you too much! If this gets any cuter I will NOT LIVE!"

Apart from sports personalities, Hollywood actress Kate Hudson too could not stop herself from admiring the post, commenting: "I can't take how cute this is! Look at that perfect second position grande plie Tennis dancing!"

The 38-year-old tennis star will bid for a record 24th Grand Slam when she takes the court at the upcoming US Open, scheduled to start from August 31.

If she manages to go all the way in the tournament, Serena will equal Margaret Court's all-time record of 24 Grand Slam wins.

Comments
Topics mentioned in this article
Serena Williams Venus Williams Caroline Wozniacki Tennis
Get the latest updates on ICC Women's Cricket World Cup 2022 and IPL 2022, check out the Schedule , Live Score and IPL Points Table. Like us on Facebook or follow us on Twitter for more sports updates. You can also download the NDTV Cricket app for Android or iOS.