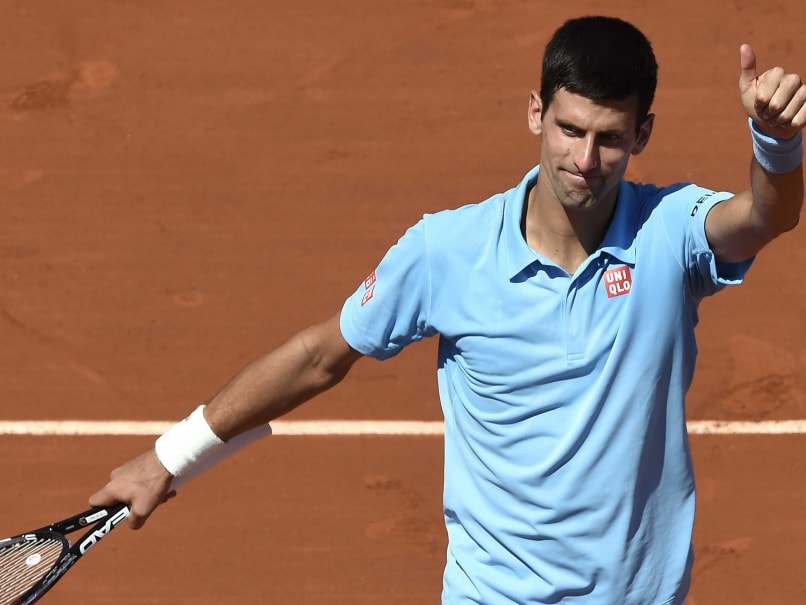 19:17 (IST): Second seed Novak Djokovic beats 18th seed Ernests Gulbis 6-3, 6-3, 3-6, 6-3 to reach men's singles final. That's it from us then, great match from Djokovic and also from Gulbis, who had some trouble with his back there but never bothered to ask for the trainer. You can catch all live updates from today's second men's singles semifinal between top seed Rafael Nadal and current Wimbledon champion Andy Murray here. Djokovic is now in the 2014 French Open final!

19:08 (IST): Djokovic drags it down Gulbis' forehand side on the baseline and holds serve to lead 4-3 in fourth set. Both players have cruised onto their games here in this set. The match is moving quite quickly despite all the heat and the fact that they are into the fourth set already.

19:02 (IST): A wild swing from Gulbis results in a love game for Djokovic. He leads 3-2 in 4th set & by 2 sets to one. Djokovic is now wearing a cap to protect himself from the bright sunshine at Court Philippe Chatrier. It has sapped much of his energy.

18:59 (IST): Gulbis consolidates his break of serve and ties things up at 2-2 in the fourth set. Djokovic leads 2 sets to one.

18:55 (IST): Gulbis breaks right back! Djokovic's backhand goes way away from the baseline, it's 1-2 in the 4th set! Djokovic also dropped his racquet in disgust there! Should have expected that from Gulbis instead. He is the one who is looking composed now. Djokovic expressing his unhappiness at a variety of things in between the change of ends and he is complaining to the umpire about something here.

18:49 (IST): Djokovic makes a great stretch volley to hold serve and lead 1-0 in 4th set. Dropped right in front of net after a grueling baseline exchange prompted Djokovic to come ahead and take the chance with the volley.

18:35 (IST): Gulbis holds to love as the players go in for a small break. He leads 4-3 in 3rd set vs Djokovic. This is the warmest day at Roland Garros this year. 28 degrees now! Gulbis gets a bit of towel around him.

18:32 (IST): Djokovic makes it 3-3 in the 3rd set after some epic exchanges! Gulbis is lighting up this competition! This game not only had the best rally of this match but it also had Gulbis teaching Djokovic a lesson. Djokovic was trying to be too smart there by getting some nice dropshots in but Gulbis had an answer for all of them. Slices? Gulbis seems to be the better one at them right now. But then Djokovic is keeping the pressure going from the baseline and is stepping ahead time and again to make it tough for Gulbis.

18:21 (IST): Gulbis sets up a great drop shot and then hits it right beyond Djokovic in open court. Leads 3-2, 3rd set. There's another great match coming up right after this one as top seed Rafael Nadal takes on Andy Murray for a final spot. You can catch updates of that match here.

18:17 (IST): Djokovic comes up with a great cross-court backhand winner and holds serve to make it 2-2 in 3rd set. The big baseline exchanges seem to have momentarily stopped but there is all indication that Gulbis will not give up this match too easily. He is serving quite well. If at all, Djokovic might need a tiebreak to win this match.

18:08 (IST): So, this time Djokovic has to do some work before he is finally able to hold serve with an ace. It's 1-1 in the third set. Djokovic hit a great forehand out wide, tackling huge amount of top spin from Gulbis as he saved himself from a break point situation.

18:04 (IST): Another big ace from Gulbis as he holds serve to lead 1-0 in 3rd set. Still trails 2 sets to love though. He needs to be a bit more composed in his dealings to be fair. Hasn't yet broken a racquet though in this match. Do we see that one coming?

17:58 (IST): Djokovic takes the second set in similar fashion to the first. He takes it 6-3 to lead two sets to love over Gulbis. (6-3, 6-3). Gulbis takes a much-needed break and is now being escorted back into the Court Philippe Chatrier by the organisers. Great task at hand now for Gulbis to come back into this.

17:53 (IST): After a series of cross-court forehand battles, Djokovic gets the break! Will serve for 2nd set at 5-3. You have to see to believe how much of hitting these guys are doing from the baseline. Gulbis has a strange forehand but it's working very well for him. Djokovic seems to be the man on a roll now though, he is much more composed.

17:41 (IST): Djokovic holds serve, leads 3-2 in 2nd set and stays in front. Gulbis taking a wild swing at everything. All his forehands are going away from the baseline but then some of then have been miraculously quick.

17:37 (IST): Gulbis serves another ace out wide to make it 2-2 in second set. Djokovic has no answer to that. The match is slowly but surely picking up pace and intensity.

17:32 (IST): Gulbis holds serve and makes it 1-1 in the second set as Djokovic forehand goes away from the baseline. Gulbis doesn't seem to be in any mood of giving up. He is striking the guts of his racquet and motivating himself to keep going. (6-3, 1-1).

17:21 (IST): Game, set! Djokovic takes the first set 6-3 vs Gulbis after some brutal forehands from both men.

17:08 (IST): Djokovic looks much more comfortable now as he consolidates his break of serve to lead 4-2 in first set vs Gulbis.

17:05 (IST): The first break of the match goes to Djokovic! He draws first blood after a series of break points. Leads 3-2 in first set vs Gulbis.

17:03 (IST): Longest rally of the match! 17 shots! Gulbis' forehand is being exposed. Djokovic has another break point.

16:45 (IST): Ernests Gulbis has started things up by holding his serve to love. There were some nice 'T' serves in there by the big man from Latvia. Gulbis leads 1-0, 1st set.

16:40 (IST): Players on court and are already having their warm-up. Although second seed Novak Djokovic is the favourite to win, we can't take away the fact that Ernests Gulbis has taken out Tomas Berdych and Roger Federer earlier in the tournament and is naturally suited to clay.

World number two Djokovic, who needs a Roland Garros title to become only the eighth man to complete a career Grand Slam, tamed big-serving Canadian Milos Raonic 7-5, 7-6 (7/4), 6-4 to reach his sixth semi-final in Paris. He will now tackle Gulbis who put out Czech sixth seed Tomas Berdych 6-3, 6-2, 6-4 to back-up his shock defeat of Roger Federer in the fourth round.

(Ernests) Gulbis is a very good player, he beat Roger (Federer) and now (Tomas) Berdych in three sets which is really impressive. He's playing his best tennis so it's going to be an important match for me," said Djokovic.

Gulbis, the 25-year-old, 18th-seeded Latvian who is better known for his colourful behaviour and outspoken comments off the court than his achievements on it, stormed into his first semi-final at a major. "This is very special, I am very happy to share it with you," said Gulbis.

"It was my best match of the tournament so far. Everything worked. Tomas was getting angry because I was hitting the lines all the time but, sorry, that's part of the sport." Gulbis has a 1-4 record against Djokovic with whom he once trained when they were youngsters in Munich.

The Serb world number two is only missing the Roland Garros trophy to complete his Grand Slam set but he moved closer towards his dream behind the back of an excellent return of serve.

The 27-year-old from Belgrade reached his sixth semi-final in Paris, the third best tally in the Open era, as he made it three wins out of three against Raonic, following Rome in May and a Davis Cup semi-final in 2013. (Read more)

Why 'GiantKiller' Gulbis Is Not Shocked by Federer's Exit

Federer, seeded fourth, has certainly overcome greater adversity to win matches, but his margins over the chase pack are thinner now, and Gulbis is coming on fast.

Their playing styles are in contrast, Federer all feline grace, Gulbis occasionally brutish effort with a stiff and distinctive forehand windup. But there is plenty of skill and variety in Gulbis' game. He beat Federer with lobs and drop shots, with acute angles and raw, straight-line power. He is 31-10 this season and has won eight straight matches on clay, capturing the title in Nice and reaching the French Open quarterfinals for the first time since 2008.

Back then, it appeared Gulbis might soon follow the lead of Djokovic, with whom he once trained at Niki Pilic's academy in Munich. But as Djokovic continued his rise, Gulbis, who comes from a wealthy family, fell away, struggling for consistency and, by his own admission, struggling to maintain focus and make good decisions.

The turning point came in 2012 when he began training in Vienna at the academy run by Bresnik, who has coached many players with big personalities, including Horst Skoff and three-time Wimbledon champion Boris Becker."He's one of the strongest personalities," Bresnik said of Gulbis. "I always compare him a little to Boris, because this has been very helpful to me that I have the experience with a guy like Boris to work with him. You know when to let somebody go and when to pull in the reins. This is the challenge."