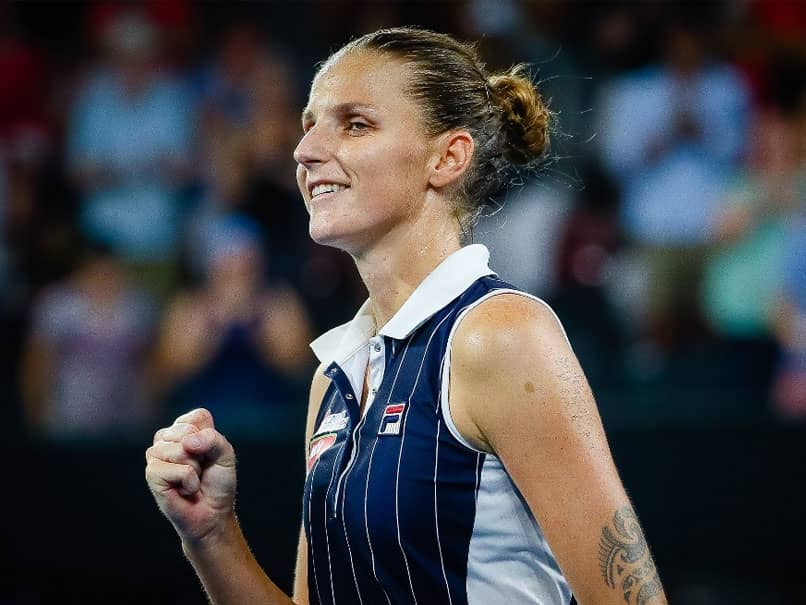 World number two Karolina Pliskova will defend her Brisbane International title after edging Naomi Osaka in an epic three-set semi-final at Pat Rafter Arena on Saturday. Pliskova triumphed 6-7 (10/12), 7-6 (7/3), 6-2 in a two hour, 48 minute marathon and will play eighth seed American Madison Keys in the decider. She was forced to come from a set down, then save a match point at 5-6 in the second, before seeing off the reigning Australian Open champion. The two are no strangers to long matches against each other -- Osaka edged Pliskova 6-4 in the third in the Australian Open semi-finals on her way to the title.

But few could have expected a match of this quality and length in the first tournament of the year.

With both players serving exceptionally well, the first set almost inevitably went to a tiebreak, which Osaka clinched on her fifth set point.

The second set was a repeat of the first with few opportunities to break until Pliskova faltered at 5-5 to give Osaka the chance to serve for the match.

She came from 0-30 down to 40-30, but Pliskova rallied, saved match point and then broke Osaka to send the set to a tiebreak.

Osaka then saw the third set slip away with two service breaks.

"That was one of the best matches that I've played on this court," Pliskova said.

"It was a great standard, and she's always tough to play against.

"I think I did a good job to stay in there after a tough first set, and in the second I just kept fighting and it paid off."

In the first semi-final, Keys held firm when it counted to defeat two time Wimbledon champion Kvitova 3-6, 6-2, 6-3 and make her first Brisbane final.

After losing the first set and being down an early break in the second, Keys began to serve more effectively and find her range with her groundstrokes against an increasingly nervous Kvitova.

From 0-2 down and staring a semi-final exit in the face, the eighth seeded Keys broke back to make it 2-2 and surged ahead to level the match.

Both players struggled to hold serve in the final set -- there were five service breaks in a row -- but at 5-3 Keys held her nerve and from 0-30 she won four points in a row to become the first American into a Brisbane final since Serena Williams won the title in 2014.

Comments
Topics mentioned in this article
Karolina Pliskova Naomi Osaka Tennis
Get the latest updates on IPL 2021, IPL Points Table , IPL Schedule 2021 , live score . Like us on Facebook or follow us on Twitter for more sports updates. You can also download the NDTV Cricket app for Android or iOS.