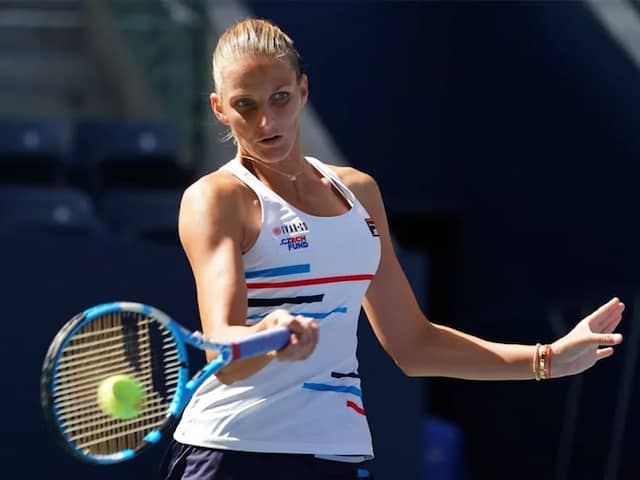 Karolina Pliskova is hoping Andy Murray's former coach can help her take the next step up.© AFP

World number two Karolina Pliskova is hoping Andy Murray's former coach can help her take the next step up as she targets a Grand Slam breakthrough and reclaiming the top ranking. The tall Czech ditched Spaniard Conchita Martinez in November despite winning a single-season career-high four titles in 2019. She has since hired Venezuelan coach Daniel Vallverdu with former Ukraine Fed Cup player Olga Savchuk -- a long-time friend -- also joining her team. "I didn't want to stay where I was," she said at the Brisbane International on Sunday ahead of opening the new season with the defence of her title.

"Of course, the year was great. I played some good tournaments, so many good matches, and I finished actually like so close to the top.

"But I felt that there's no way she (Martinez) can maybe help me more, so that's why I changed."

Vallverdu previously worked with Murray from 2010 to 2014 and was part of the Ivan Lendl-led team that helped the Scot win Olympic gold and the US Open in 2012 as well as Wimbledon in 2013.

He also had stints with Tomas Berdych and Grigor Dimitrov, but has not worked before with a top women's player.

"I think it's also new for him, new for me. But hopefully I think or I feel he can add some good things to my tennis," said the 27-year-old, who first became world number one in July 2017.

"We will see how everything goes in tournaments. I think it's going to need some time for him, also for me to get used to it.

"But he's a clever guy and it's still tennis. It's not a different sport. Of course, sometimes it looks like it, but it's actually not. So I think he will adapt (to the women's game).

"I think I'm quite easy, like, tough on one hand to work with, but on the other hand easy, so I think he's not going to have problems with me," she added.

While Pliskova has previously attained the sport's top ranking -- now held by Australia's Ashleigh Barty, who is also playing in Brisbane -- she has yet to win a Grand Slam.

Her best effort was making the US Open final in 2016, although the upcoming Australian Open is one of her most successful, reaching the semi-finals last year and the quarters in the two years before that.

"I actually like everything here in Australia. I just love the country, I just like the people. I think the atmosphere here is always great," she said in explaining her success in the country.

Andy Murray Olga Savchuk Tennis
Get the latest Cricket news, check out the India cricket schedule, Cricket live score . Like us on Facebook or follow us on Twitter for more sports updates. You can also download the NDTV Cricket app for Android or iOS.