Karolina Pliskova's defeat to Anastasia Pavlyuchenkova means that two of the top three seeds are now out of the women's draw at the Australian Open. 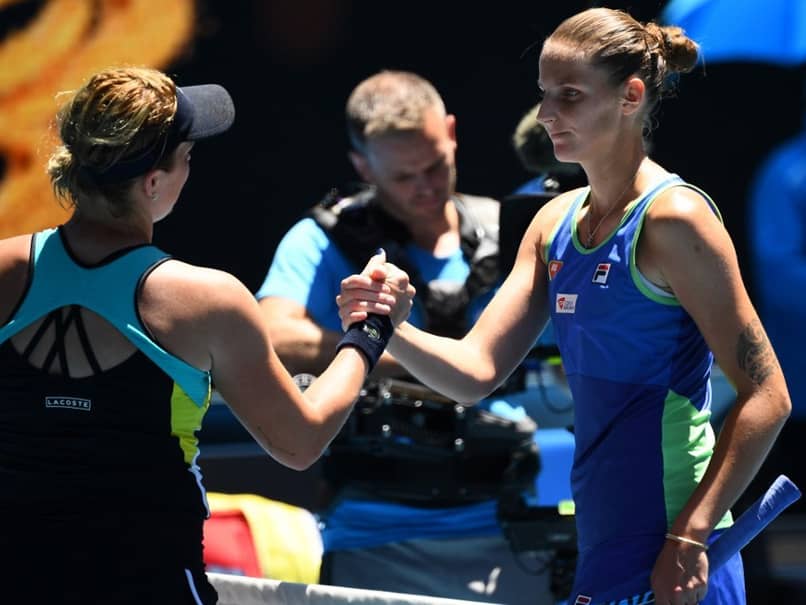 Karolina Pliskova lost to Anastasia Pavlyuchenkova as the shocks kept rolling in the Australian Open.© AFP

World number two Karolina Pliskova bombed out to Anastasia Pavlyuchenkova Saturday as the shocks kept rolling in the Australian Open third round. A day after Serena Williams and defending champion Naomi Osaka both exited, Russia's Pavlyuchenkova won 7-6 (7/4), 7-6 (7/3) for her first victory over the Czech second seed. The result means that two of the top three seeds are now out of the women's draw, after third-ranked Osaka fell to 15-year-old American Coco Gauff on Friday. Serena Williams, the seven-time Melbourne champion who was seeking a record-equalling 24th Grand Slam title, was stunned by China's Qiang Wang.

"I don't know what to say, of course I'm really happy but I won't really realise that until later," said Pavlyuchenkova, a quarter-finalist last year and in 2017.

"It was a lot of fun and I actually really enjoyed it."

Pliskova won this month's WTA Brisbane title, beating Osaka on the way, but she was always under pressure against 30th seed Pavlyuchenkova in hot conditions on the Melbourne centre court.

They exchanged breaks in each set but Pavlyuchenkova had the edge in both tie-breakers, taking the win after 2hrs 25mins when Pliskova netted a forehand.

"I love this game (tennis) and that's what drives me, I appreciate more what I have now," Pavlyuchenkova said. "I am hungry and motivated so hopefully can achieve more.

"I love the heat, even though everyone says you're from Russia and love cold weather, I don't, I hate it!"

The Russian will play former champion Angelique Kerber in the last 16 as she attempts to reach the last eight for a third time.

Comments
Topics mentioned in this article
Karolina Pliskova Anastasia Pavlyuchenkova Serena Williams Coco Gauff Naomi Osaka Tennis
Get the latest updates on IPL 2021, IPL Points Table , IPL Schedule 2021 , live score . Like us on Facebook or follow us on Twitter for more sports updates. You can also download the NDTV Cricket app for Android or iOS.