Karolina Pliskova's third Brisbane International title in four years and her 16th on the WTA tour, stamps her as one of the favourites for the Australian Open. 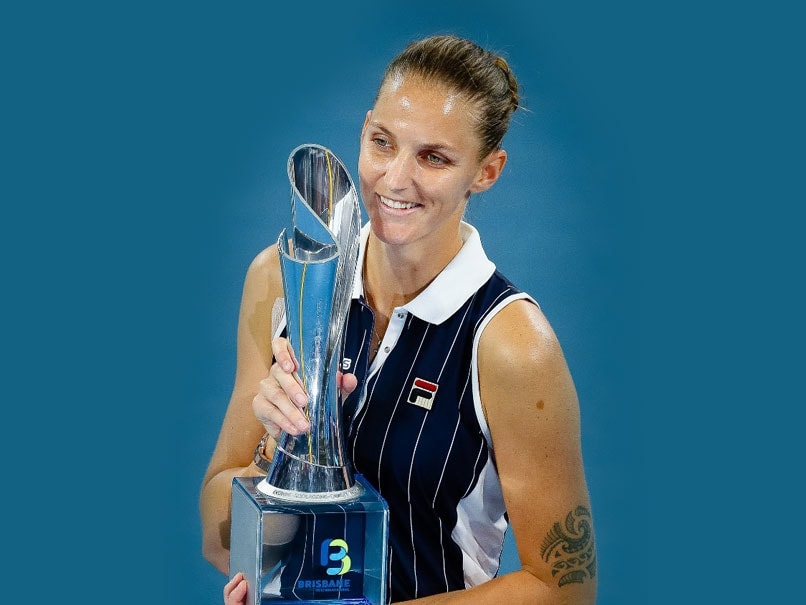 Karolina Pliskova said her tough three-set win over Madison Keys in the final of the Brisbane International on Sunday was the ideal preparation for next week's Australian Open. The Czech world number two won 6-4, 4-6, 7-5 in two hours, seven minutes on Pat Rafter Arena. Pliskova's third Brisbane title in four years and her 16th on the WTA tour stamps her as one of the favourites for the year's first Grand Slam. The former world number one is yet to win a Grand Slam singles title, but she reached the semi-finals in Melbourne last year, falling in three sets to eventual champion Naomi Osaka.

Pliskova beat Osaka in a marathon three-hour semi-final on Saturday night, and the way she backed up to defeat Keys in another gruelling clash on Sunday shows she has form and fitness heading into the Australian Open.

She said while she still saw the Brisbane International primarily as part of her Melbourne preparations, it was a good tournament to win.

"I think it always gives you some extra confidence and at least you know which level are you at, so I think it was a great way to start the year.

"But of course, Grand Slam or any other tournament it always starts on zero, so there's nobody's really thinking that, 'Oh, she won a tournament two weeks ago'.

"I can still feel well and confident and whatever, but I think we still have to start from zero."

Keys, who reached the US Open final in 2016 on her way to a career-high world ranking of seven, had a resurgent 2019, winning titles in Charleston and Cincinnati.

She will also fancy her chances at Melbourne Park after coming from a set down to beat two-time Wimbledon champion Petra Kvitova in the semi-finals and then pushing Pliskova all the way in the decider.

"I think, obviously, it's great because you're playing some really good tennis going into some of the biggest tournaments," Keys said about taking confidence from reaching the Brisbane final into the Australian Open.

In a high-quality and evenly matched final, Pliskova seized the early advantage when she broke Keys at 4-4 then held serve to take the first set in 39 minutes.

However, in the second set Pliskova's big serve went off the boil while Keys upped her level.

Although Pliskova broke Keys at 2-2, the American broke straight back then took advantage of another poor Pliskova service game at 4-5 to break again and level the match at one set apiece.

Pliskova then broke Keys in the seventh game, but faltered under the pressure of serving for the match at 5-4.

But the American couldn't take advantage and Pliskova broke straight back, this time making no mistake, holding to love and taking the title when a Keys backhand return sailed wide.

Comments
Topics mentioned in this article
Karolina Pliskova Madison Keys Naomi Osaka Tennis
Get the latest updates on Fifa Worldcup 2022 and check out  Fifa World Cup Schedule, Stats and Live Cricket Score. Like us on Facebook or follow us on Twitter for more sports updates. You can also download the NDTV Cricket app for Android or iOS.