Rafael Nadal was largely untroubled as he swept past Italy's Matteo Berrettini to book his place in the Australian Open men's singles final. 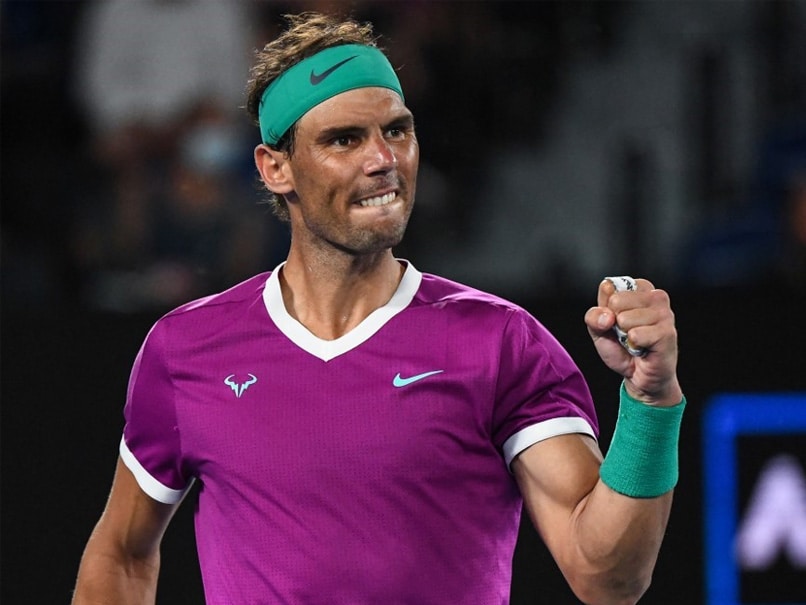 Rafael Nadal in action at the Australian Open.© AFP

Rafael Nadal marched into the final of the Australian Open to be just one match away from becoming the all-time men's Grand Slam leader after overcoming Matteo Berrettini in their semi-final on Friday. The 35-year-old Spanish great, seeded sixth, was too solid for the Italian seventh seed, winning 6-3, 6-2, 3-6, 6-3 in 2hr 55min, and will face either Daniil Medvedev or Stefanos Tsitsipas in Sunday's final. Nadal is level on 20 majors with his golden era rivals Novak Djokovic, who was deported on the eve of the tournament, and Roger Federer, who is absent with injury.

It gives the Spaniard an opportunity to go clear at the top and add to his lone 2009 Melbourne Park crown in his sixth Australian Open final.

"For me it's all about the Australian Open more than anything else, it's an amazing event," Nadal said.

"I have been a little unlucky during my career with some injuries and I played in some amazing finals here with some good chances against Novak in 2012 and Roger 2017, I was close a couple of times.

"So I'll just try to enjoy today's victory and try my best in the final."

It has been an extraordinary effort from Nadal at the year's opening major, having to modify his game to compensate for a degenerative bone disease in his left foot that ended his 2021 season last August.

He then caught Covid in December which, he said, made him "very sick".

Yet Nadal brushed aside Berrettini's challenge with precision shot-making, while last year's Wimbledon finalist could not overcome his sluggish start.

The stark statistic confronting Berrettini was that Nadal had never lost in his 20 Grand Slam semi-finals after leading by two sets.

"I started the match playing great, the first two sets were one my best for a long time and I knew Matteo was a very solid player, very dangerous and I knew at some point in the third set he was going to go for his shots," Nadal said.

"It means a lot to me to be in the final again here," added Nadal who is now unbeaten in 10 matches to start the 2022 season after winning a warm-up event in Melbourne.

Nadal solidly rolled through his service holds to claim the opening set on his fourth set point in 43 minutes.

Nadal was honing in on Berrettini's backhand and got his reward with a double break to take a stranglehold on the second set.

He finished off a 10-stroke rally with a delicate slice that again exposed Berrettini's backhand to consolidate the double break.

Berrettini, the first Italian man to play in the Australian Open semi-finals, raised his level in the third set.

He brought up his first break points in six sets in his two encounters with Nadal and broke with a forehand winner to 5-3 and served out to reduce the deficit to one set.

But the key break came in the eighth game of the fourth set, Nadal bringing up two separate break points and getting the crucial break when Berrettini netted a forehand before serving out for the match.

Comments
Topics mentioned in this article
Rafael Nadal Matteo Berrettini Tennis
Get the latest updates on IPL Auction 2023 and check out  IPL 2023 and Live Cricket Score. Like us on Facebook or follow us on Twitter for more sports updates. You can also download the NDTV Cricket app for Android or iOS.