Novak Djokovic has sewn up the end of year ATP top spot after elbowing Roger Federer off top spot in the rankings published on Monday. 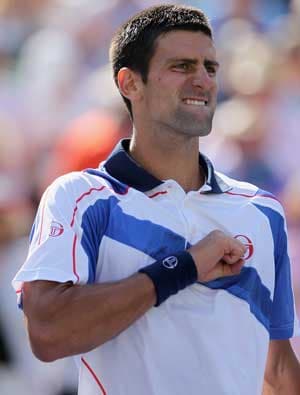 Novak Djokovic has sewn up the end of year ATP top spot after elbowing Roger Federer off top spot in the rankings published Monday.

Djokovic moved back into pole position after losing out to Federer following the latter's seventh Wimbledon success on July 9.

And the Serb will remain top now through into 2013 as Federer cannot improve on last year's showing at the ATP Tour finals in London this week as he is reigning champion at the season-closing event.

Federer conceded the number one ranking when opting out of defending his Paris Masters title last week on the grounds he could not do himself justice by playing successive tournaments in Basle, Paris and London. (Also read: Djokovic calls Federer as 'real No.1')

He also hailed Djokovic as deserving of the top spot for the year.

Although the Serb did not manage to scale the heights of 2011, when he won three out of the four Grand Slam singles titles, this year has seen him retain his Australia Open crown and reach the finals of both the French and US Opens, losing the latter to Britain's Andy Murray.

Paris Masters champion David Ferrer is still fifth but closing in on former world number one Rafael Nadal, while Poland's Jerzy Janowicz, Paris finalist, is heading for the top 20 - he currently stands 26th, up from 69th.

Comments
Topics mentioned in this article
Tennis Rafael Nadal Andy Murray Roger Federer David Ferrer Novak Djokovic Bernard Tomic Stanislas Wawrinka
Get the latest Cricket news, check out the India cricket schedule, Cricket live score . Like us on Facebook or follow us on Twitter for more sports updates. You can also download the NDTV Cricket app for Android or iOS.