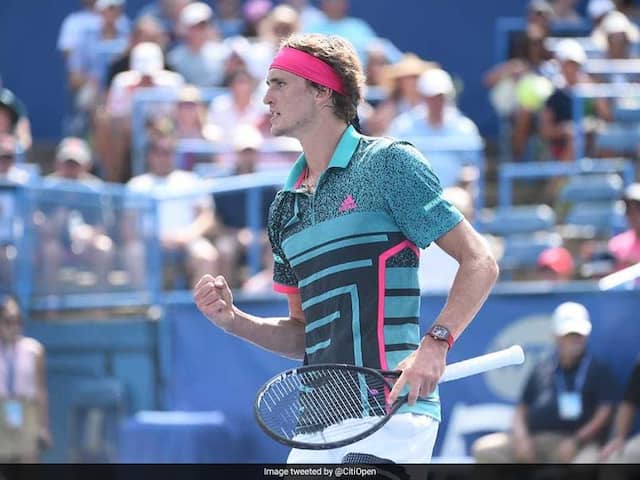 Alexander Zverev won his third title of the year and the ninth of his career.© Twitter

Alexander Zverev says defending his ATP Washington Open title on Sunday shows growing in strength and maturity, but the world number three still sees a big gap to Rafael Nadal and Roger Federer. The 21-year-old German won his third title of the year and the ninth of his career by defeating Australian teen Alex De Minaur 6-2, 6-4 in the 50th edition of the US Open tuneup event. "What a fantastic week for me," Zverev said. "Winning a tournament on its 50th anniversary is something amazing. This has been a very special week for me.

"(Defending a title) feels great and shows mental strength as well. It shows a little maturity I think."

While Zverev stands atop a generation of rising young stars, he still puts 20-time Grand Slam winner Federer, 36, and 17-time Grand Slam champion Nadal, 32, on the highest of pedestals.

"Roger and Rafa are still the best out there and still competing for Grand Slam titles," he said. "I haven't won a Grand Slam title. Saying I'm on their level wouldn't be fair to them."

Not since 20-year-old Rafael Nadal beat 19-year-old Novak Djokovic 11 years ago at Indian Wells had the combined ages of ATP finalists been so young. And not since 1995 in Buenos Aires had all four semi-finalists been 21-or-under, Zverev being the eldest.

"It's not only me that's the future of the sport. I think everybody who made it to the semi-finals is the future," Zverev said. "We all want to be the best. Some of us already think we're the best. We all have a lot of talent."

Zverev struggled when asked where his game needs work, saying with a smile, "I think I'm close to perfection."

De Minaur, who took only 11 points off Zverev's serve, could somewhat agree after falling in 74 minutes.

"He played some great tennis. He came out blazing and was too good for me," De Minaur said. "It gives you that fire to replicate the success he has had at such a young age. I think he's going to be around for a very long time."

It was the second career ATP final for the 19-year-old from Sydney, who lost a final there to Daniil Medvedev in January. De Minaur saved four match points in beating Andrey Rublev in a grueling semi-final to get there.

"I did everything I could to recover," De Minaur said. "I'll have to get better at it and my body will adjust to the circumstances."

The 72nd-ranked Aussie will jump to a career-best 45th in Monday's rankings.

"I'm really proud of myself. I played some high-level matches," De Minaur said.

Zverev, who needed a fifth-set Davis Cup tie-breaker to beat De Minaur in their only prior meeting, broke twice to win the first set in 30 minutes. He smacked a forehand winner to break for a 2-1 edge and held serve to the finish.

"To go from nothing to back-to-backs like that was quite a shock to the system. He was a bit beaten up," said Andy's brother Jamie Murray, who won the doubles title with Brazilian Bruno Soares.

Murray also withdrew from next week's event in Canada but plans to play in Cincinnati the following week.

"Andy is on his way back," Zverev said. "He looked unbelievable here. It's going to be great to see what he can do."

It was the 33-year-old Russian's first crown since 2016 in Moscow and second in Washington after 2014.

Comments
Topics mentioned in this article
Alexander Zverev Rafael Nadal Roger Federer Tennis
Get the latest Cricket news, check out the India cricket schedule, Cricket live score . Like us on Facebook or follow us on Twitter for more sports updates. You can also download the NDTV Cricket app for Android or iOS.