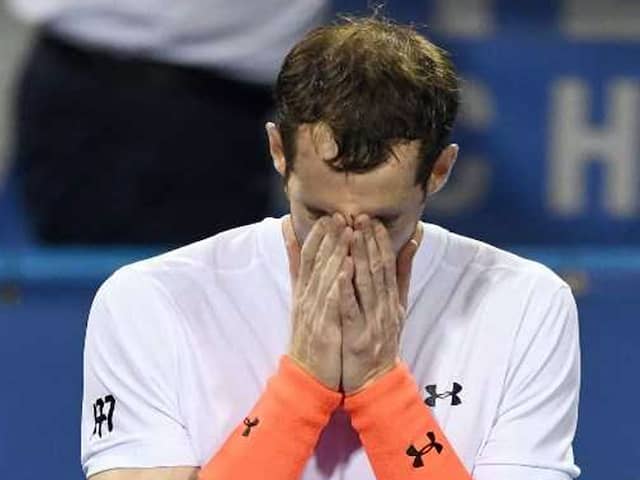 A tearful Andy Murray advanced to the ATP Washington Open quarter-finals in a three-hour marathon ending at 3:00 am Friday, then ripped organizers for putting him in such a situation. Three-time Grand Slam champion Murray, in his first hardcourt event after an 11-month layoff for a right hip injury, outlasted Romania's 93rd-ranked Marius Copil 6-7 (5/7), 6-3, 7-6 (7/4). The 31-year-old Scotsman won his third three-set victory in four days, having been on the court for eight hours 11 minutes in all, and he started at midnight thanks to a fourth day of rain delays.

"I don't think I should be put in a position like that," Murray said. "(My body) doesn't feel great right now.

"I've had a few long matches. Finishing matches at three in the morning isn't good for anyone involved in the event, players, TV, fans, anyone.

"When you're expected to come back and perform the next day, I think that's unreasonable."

And the sheer lateness of the hour wasn't good for players.

"That's something the tour needs to look at," Murray said.

The British star said he was unlikely to finish post-match conditioning and get to sleep before 5:30 am, ahead of a scheduled Friday quarter-final against 19-year-old Australian Alex De Minaur.

"Not playing, potentially, is possible. I don't know how players are expected to recover from that," Murray said.

"It's like playing two matches in a day. I'm not sure how well I'll recover from that."

After the final point, Murray went to his chair, buried his face in a towel and wept, sobbing at times, and kept his head down and face covered as he exited the court.

"Not a whole lot, really, the emotions coming out at the end of an extremely long day and a long match," Murray said of what made him so emotional.

Former world number one Murray, now ranked 832, denied Copil on all four break chances in the first set and took a 5-0 tie-breaker lead only to drop the next seven points and squander the set, yelling at himself several times before netting a backhand to end the misery.

Murray broke to open and close the second set, then traded breaks in the sixth and seventh games on the way to a final tie-breaker.

Murray hit a forehand long to fall level 3-3, then slammed his racquet to the court, recovered it and hit three winners to reach match point, winning when Copil netted a backhand.

If his body can take it, Murray plays for a semi-final spot in Friday's last match against 72nd-ranked De Minaur, who pulled two upsets Thursday after rain, dumping US 11th seed Steve Johnson 6-4, 7-5 and South Korean eighth seed Chung Hyeon 6-2, 4-6, 6-2.

"We had a great time," Alex said. "I was happy and enjoying the moment. I hope we meet again someday in a final."

Mischa was nearly in tears at the start at a family dream come true.

"When we came back to the benches I had to fight back my tears," he said. "It was a big day, big match. It was very emotional for me. It was just a great day."

Next up for Alex will be Japanese seventh seed Kei Nishikori, who dispatched Canadian ninth seed Denis Shapovalov 7-6 (7/1), 6-3.

"There will be a lot of points from the baseline," Nishikori said. "I've got to work the point, play more aggressively and move the ball around."

Ninth-ranked Isner, fatigued after a first-ever Grand Slam semi-final at Wimbledon and an Atlanta title run, blamed his low-energy outing on his workload.

"Noah played with more energy. He was just tougher than I was. He was hungry," Isner said.

"This could very well be a good loss. I need a little rest. There are some big tournaments coming up. I want to be full of energy for those."

"It definitely bothers me a bit out there on the court, but it isn't anything serious," Osaka said. "We're going to prep and get healthy."