The three-time Grand Slam champion, who dislodged Novak Djokovic from the top of the rankings towards the end of 2016, has slipped to 19th in the world due to his lengthy lay-off. 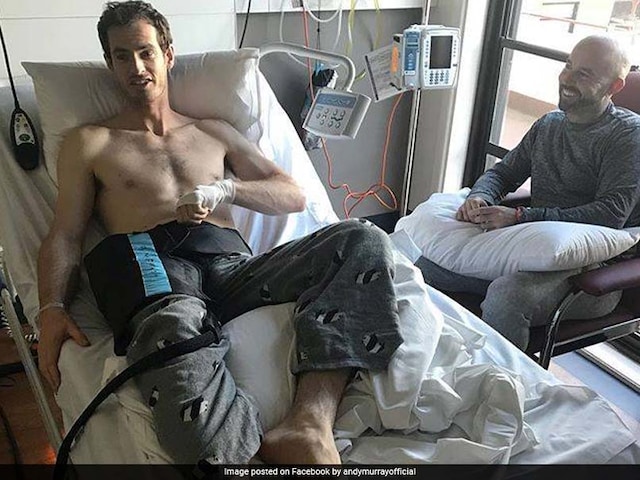 Andy Murray announced he had hip surgery in Australia on Monday and is hoping to return to competitive tennis in time for the grasscourt season midway through the year. The 30-year-old Scot has not played competitively since being knocked out of the Wimbledon quarter-finals last year and last week withdrew from this month's Australian Open. "Today I underwent successful right hip surgery at the St Vincent Hospital in Melbourne," the former world number one said on Facebook. "I'd like to thank Dr John O'Donnell and all of the staff for looking after me. I look forward to returning to competitive tennis during the grasscourt season. Thanks to everyone for all the well wishes and support over the last few days. I'll come back from this."

The three-time Grand Slam champion, who dislodged Novak Djokovic from the top of the rankings towards the end of 2016, has slipped to 19th in the world due to his lengthy lay-off.

He first felt pain in his right hip during his French Open semi-final loss to Swiss Stan Wawrinka in June.

The grasscourt season starts after the French Open, with the first event taking place in Stuttgart, Germany, from June 11.

Murray is a two-time Wimbledon winner and has been champion at Queen's in London on five occasions, both of which are played on grass courts.

The BBC reported that he hopes to be hitting balls on court in about seven or eight weeks and has been given a timescale of 14 weeks as a guide for a return.

But Murray said he is not "interested in coming back for a specific tournament", in comments reported by the BBC.

"My plan is to be back playing around the grass-court season -- potentially before then -- but I'm certainly not going to rush anything," he said. "I want to know when I come back that I'm ready."

"The surgeon felt that my hip will be feeling better than it did a year ago," Murray added. "Obviously, I was still doing fine a year ago -- I was ranked number one in the world.

"I'm certainly not going to be putting in the same amount of tournaments and effort to try to get to number one in the world. I'll be playing a reduced schedule, and then focusing more on trying to win major events and big tournaments rather than trying to achieve certain ranking goals."

A host of top names are battling to be fit for the first Grand Slam of the year, which starts in Melbourne on January 15.

Japan's Kei Nishikori has already pulled out and world number one Rafael Nadal and six-time Australian Open champion Novak Djokovic remain huge doubts, having yet to play a competitive match this year.

Former champion Stan Wawrinka and Canada's Milos Raonic are also returning from injuries but intend to play in Melbourne.

Comments
Topics mentioned in this article
Andy Murray Tennis
Get the latest Cricket news, check out the India cricket schedule, Cricket live score . Like us on Facebook or follow us on Twitter for more sports updates. You can also download the NDTV Cricket app for Android or iOS.