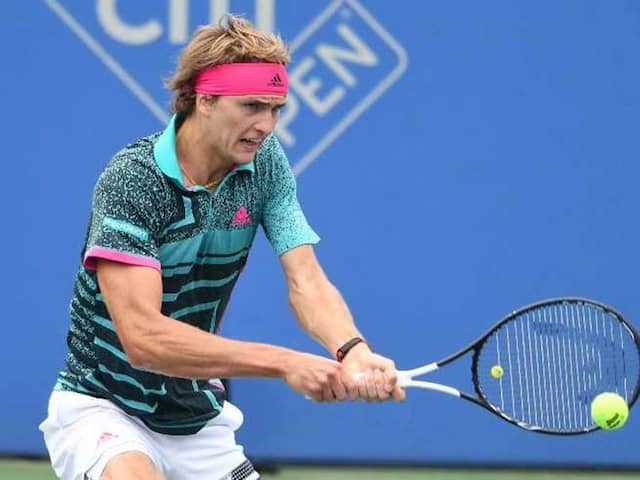 Defending champion Alexander Zverev outlasted Japan's Kei Nishikori 3-6, 6-1, 6-4 on Friday to reach the ATP Washington Open semi-finals while three-time Grand Slam champion Andy Murray withdrew citing fatigue. Germany's third-ranked Zverev, seeking his fifth final of the season and third title of the year after Munich and Madrid, dispatched seventh-seed Nishikori, the 2015 champion, as he did in last year's Washington semi-finals. "I felt like I had the more powerful shot," Zverev said. "That worked out well in most of the rallies for me. It was a good high-level match."

"I'm super happy I got this win in two sets and saved some energy," Tsitsipas said. "I was serving very well. Confidence plays a very important role in my game so getting early breaks was super important."

Australian Alex De Minaur, another 19-year-old, reached the semi-finals by walkover when Murray withdrew, citing the fatigue of three grueling three-set wins that kept him on the court more than eight hours in total.

Murray, who also withdrew from next week's Toronto Masters event, was in only his third event back and first hardcourt event since March 2017 at Indian Wells after an 11-month layoff with a hip injury.

"I'm exhausted after playing so much over the last four days, having not competed on the hard courts for 18 months," Murray said. "I also need to be careful and to listen to my body as I come back from a long-term injury.

"I'm gutted not to be playing. There are lots of positives to take from this week, so I'll take some time to rest and recover and then head to Cincinnati early to prepare and get ready."

The 31-year-old Scotsman, a former world number one now ranked 832, broke down in tears after a 3:02 a.m. Friday finish to his third match, the latest finish in the event's 50-year history.

"I don't think I should be put in a position like that," Murray said. "Finishing matches at three in the morning isn't good for anyone involved."

De Minaur will next play either Russian 16th seed Andrey Rublev or American Denis Kudla, whose match was postponed to Saturday, among with three women's quarter-finals, by a fifth consecutive day of rain.

If 20-year-old Rublev advances, Zverev will be the oldest semi-finalist at age 21. His reaction: "My God, that hasn't happened to me before."

Tsitsipas, ranked a career-high 32nd, reached the fourth round last month at Wimbledon, becoming the first Greek player in the last 16 of a Grand Slam in the Open Era.

Tsitsipas, who reached his first ATP final in May at Barcelona but lost to Rafael Nadal, says he won't change to face Zverev.

"Need to keep doing what I'm doing, play my game and keep my level high," Tsitsipas said. "I just need to stay humble, serve well, play well from the baseline and be aggressive."

Zverev and Tsitsipas are both of Russian heritage. Zverev's Russian parents moved to Germany in 1991. Tsitsipas's mother was a top 1980s Soviet Union player.

"The Soviet Union back then was a very technical school," Zverev said. "It helped us out a lot to have parents to teach us the technique. We're not all the same but we don't have a shot that's so bad."

"The discipline my mom knew from the Soviet Union side," Tsitsipas said. "There's something about the Russian culture that helps you mature faster than other cultures."

Nishikori likes where his game is at with the US Open still more than three weeks away.

"I'm playing good," Nishikori said. "I'll try to play a couple more good tournaments and do my best at the US Open."