However, one truly spectacular moment came on the third ball of the ninth over as Glenn Phillips took a sensational catch 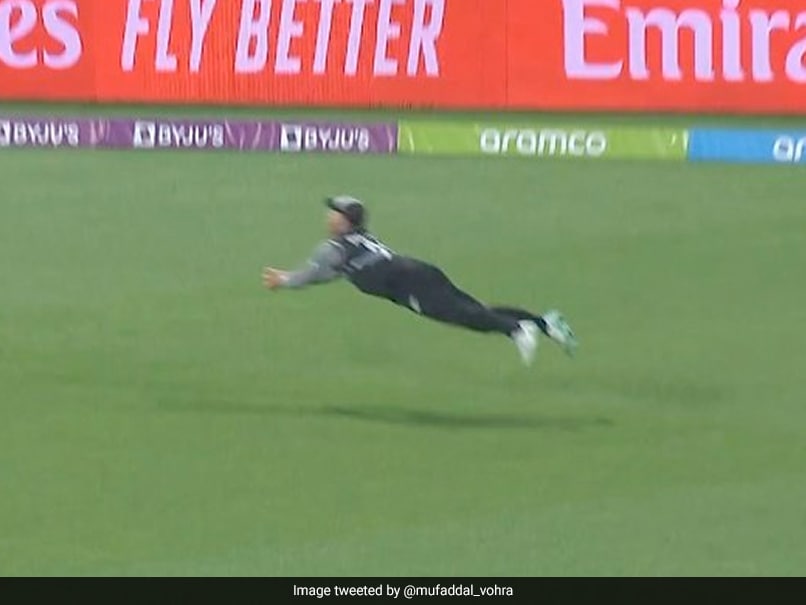 Kane Williamson-led New Zealand entered the contest against Australia in the Super 12 stage of the ongoing T20 World Cup as underdogs but the BlackCaps were on their game from the get-go. With the bat in hand, the side posted 200/3 in 20 overs owing to Devon Conway's unbeaten knock of 92 runs. Finn Allen and Jimmy Neesham also chipped in with knocks of 42 and 26 respectively. Defending the total, the Kiwis came out all guns blazing and Tim Southee removed the likes of David Warner and Mitchell Marsh.

However, one truly spectacular moment came on the third ball of the ninth over as Glenn Phillips took a sensational catch. Off the bowling of Mitchell Santner, Marcus Stoinis made some room and was looking to go inside out over cover.

The ball was well wide off the sweeper cover but Phillips ran from the deep, and threw himself towards the ball. He went two-handed and held onto an absolutely stunning catch.

We can reveal that this catch from Glenn Phillips is one of the moments that could be featured in your @0xFanCraze Crictos of the Game packs from Australia v New Zealand.

Grab your pack from https://t.co/8TpUHbQQaa to own iconic moments from every game. pic.twitter.com/VCDkdqmW3m

Earlier, it was Australia captain Aaron Finch who won the toss and opted to bowl first. Conway top-scored with an unbeaten knock of 92 as New Zealand posted 200/3 in 20 overs. Finn Allen scored 42 while Jimmy Neesham played a 26-run cameo of just 13 balls.

Australia and New Zealand are placed in Group 1 of the Super 12 stage alongside England, Afghanistan, Sri Lanka and Ireland.

Mitchell Santner ICC T20 World Cup 2022 Cricket
Get the latest updates on IPL Auction 2023 and check out  IPL 2023 and Live Cricket Score. Like us on Facebook or follow us on Twitter for more sports updates. You can also download the NDTV Cricket app for Android or iOS.