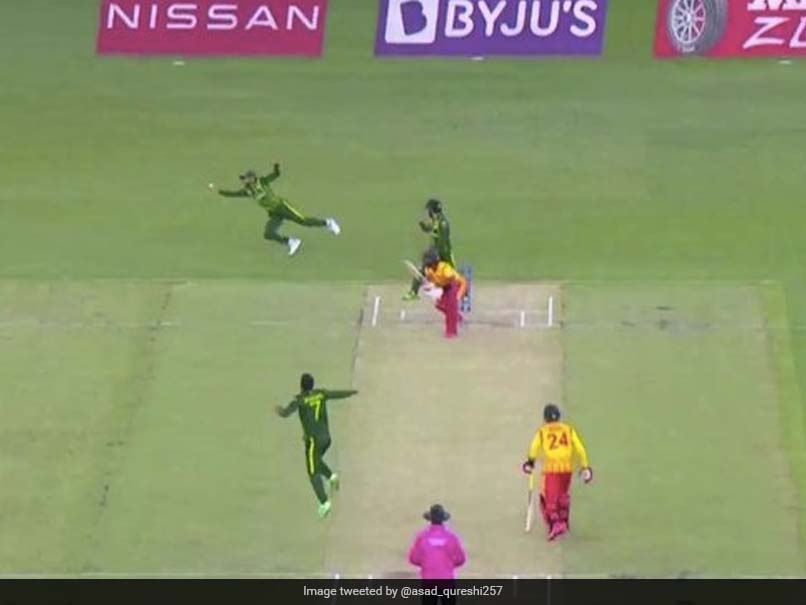 ICC posted a video of the catch, with the caption: "Catch of the tournament?"© Twitter

Pakistan gave an exceptional performance with the ball during the Super 12 clash of the T20 World Cup, against Zimbabwe as they restricted the Craig Ervine-led side at 130/8 in 20.0 overs. Mohammad Wasim Jr took four wickets while Shadab Khan scalped three, with Haris Rauf taking one. For Zimbabwe, Sean Williams top-scored with 31 runs but one thing which left everyone spell-bound was the brilliant catch by Pakistan skipper Babar Azam, to dismiss Regis Chakabva.

In the 14th over, which was bowled by Shadab Khan, Chakabva was on strike. He played a defensive shot on the sixth delivery of the over, which went towards Babar Azam at the slip. Babar dived to take a single-handed catch to dismiss Chakabva for a duck. It was Shadab's second consecutive, as he also bowled out Sean Williams on the fifth delivery of the same over.

ICC posted a video of the catch, with the caption: "Catch of the tournament?"

The catch by Babar left all the players and fans awestruck as everyone could not stop showering their love for the brilliance of the catch.

Coming to the match, fast bowler Mohammad Wasim registered his best figures in the shortest format as he and spinner Shahdab Khan helped Pakistan restrict Zimbabwe to a modest 130 for 8 in their T20 World Cup match here on Thursday.

Wasim (4/24) and Shadab (3/23) shared seven wickets between them to derail Zimbabwe innings after a fine start.

Haris Rauf, who was taken to the cleaners by Virat Kohli in the penultimate over in their last match, also recorded his best economical T20 bowling figures, finishing with 1 for 12 from his four overs.

Regis Chakabva ICC T20 World Cup 2022 Cricket
Get the latest updates on IPL Auction 2023 and check out  IPL 2023 and Live Cricket Score. Like us on Facebook or follow us on Twitter for more sports updates. You can also download the NDTV Cricket app for Android or iOS.