de Silva went on to score 26 runs off 23 deliveries and was involved in a 69-run second-wicket stand with Pathum Nissanka (40). It laid the foundation for Sri Lanka's competitive total of 157/6 in 20 overs. 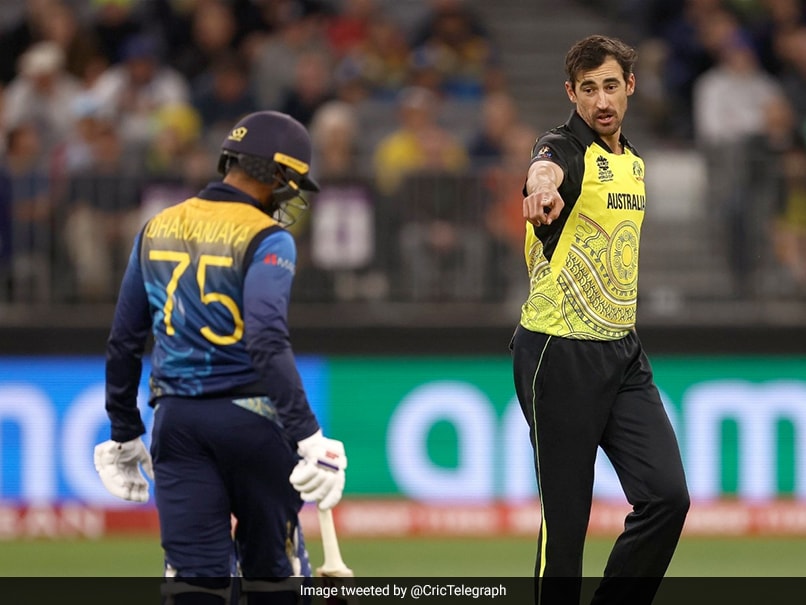 Australia paceman Mitchell Starc was in no mood to compromise on his team's chances in the crucial game against Sri Lanka on Tuesday as he was seen warning batter Dhananjaya de Silva in the fifth over of the Asian side's innings for leaving the crease early. Several outlets reported that Starc gave a warning to de Silva not once but twice for backing up too far.

de Silva went on to score 26 runs off 23 deliveries and was involved in a 69-run second-wicket stand with Pathum Nissanka (40). It laid the foundation for Sri Lanka's competitive total of 157/6 in 20 overs.

Starc bowled a tidy spell of 1/23 in the match. He had warned England captain Jos Buttler in a similar manner during Australia's T20I series just before the World Cup. The stump mic had picked up audio of Starc making a reference to Indian woman cricketer Deepti Sharma, who had run out England's Charlie Deane for backing up too far and that became a huge talking point in the world of cricket.

Mitch Starc has ignited Australia's must-win clash against Sri Lanka, warning a mankad could be on the cards in Perth 👀

"I am not Deepti, but I won't do it. Doesn't mean you can leave early," Starc had said.

To this, Buttler replied: "I don't think I did."

India all-rounder Hardik Pandya has also opined on the matter.

"We need to stop making a fuss about this running out the non-striker. It is a rule, as simple as that. To hell with the spirit of the game, if it is there, it is there. Personally, I have no problem with it. If I am out of my crease, and someone runs me out, it is fine. It is my mistake," Hardik said on the latest episode of 'ICC Review'.

Dhananjaya de Silva ICC T20 World Cup 2022 Cricket
Get the latest updates on IPL Auction 2023 and check out  IPL 2023 and Live Cricket Score. Like us on Facebook or follow us on Twitter for more sports updates. You can also download the NDTV Cricket app for Android or iOS.