Watch: "New Faces" Of Team India Speak About Quarantine And Hitting The Gym Ahead Of Sri Lanka Tour

On Friday, BCCI posted a video of Indian squad, which has a lot of players who will don India colours for the first time, hitting the gym ahead of the Sri Lanka tour. 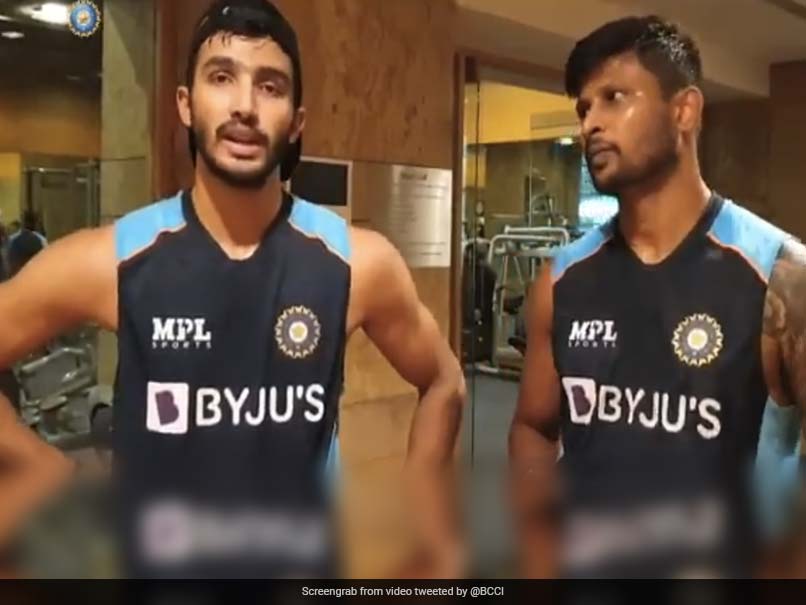 Devdutt Padikkal and Krishnappa Gowtham are among the new faces in the Indian team for SL tour.© BCCI/Twitter

A new-look Team India is set for their upcoming limited-overs challenge against Sri Lanka under the leadership of Shikhar Dhawan. The Indian players are undergoing a two-week quarantine in Mumbai before boarding their flight to Colombo. Now, after having served a week in isolation, the players have been permitted to train together. On Friday, the official Twitter handle of the Board of Control for Cricket in India (BCCI) posted a video of the team's training session. In the clip, the "newbies" of the team -- Devdutt Padikkal, Nitish Rana, Krishnappa Gowtham, and Chetan Sakariya -- spoke about the isolation and on getting their maiden call-up for the national side.

"Brand "New Video" Alert. New faces, New beliefs, New energy, #TeamIndia's talented newbies speak about their run of emotions after getting out of quarantine, hitting the gym & gearing up for the Sri Lanka series," BCCI captioned the video on Twitter.

New faces
New beliefs
New energy #TeamIndia's talented newbies speak about their run of emotions after getting out of quarantine, hitting the gym & gearing up for Sri Lanka series#SLvIND

The footage starts with leg-spinner Yuzvendra Chahal entering the gym, wearing a mask, followed by middle-order batsman Shreyas Iyer. The video also includes a short byte from the newcomers in the team.

Padikkal, who earned his maiden call up on the back of some brilliant performances in domestic cricket, said that it "felt great to get out of quarantine and have a great training session".

Padikkal's Karnataka teammate Krishnappa Gowtham said that it was nice to train with the Royal Challengers Bangalore (RCB) cricketer. The Chennai Super Kings (CSK) all-rounder also poked Padikkal for not gaining any weight.

Sakariya kept looking at himself in the mirror after wearing the India jersey. "I have been looking myself in the mirror ever since I left my room," the 23-year-old Saurashtra and Rajasthan Royals (RR) bowler said. He also expressed his delight at receiving the maiden call up for the country, saying that "happy to get my maiden India call-up".

"The first seven days were very difficult for me as I was waiting to meet my teammates," said middle-order batsman Nitish Rana.

India are scheduled to face Sri Lanka in a three-match ODI and three-match T20I series, starting on July 13.

Shikhar Dhawan Devdutt Padikkal Nitish Rana Krishnappa Gowtham Chetan Sakariya Sri Lanka vs India, 2021 Cricket
Get the latest updates on ICC Women's Cricket World Cup 2022 and IPL 2022, check out the Schedule , Live Score and IPL Points Table. Like us on Facebook or follow us on Twitter for more sports updates. You can also download the NDTV Cricket app for Android or iOS.