We Got A 'Good Hiding' From India, Says South African Coach Ottis Gibson

A disappointed South Africa coach Ottis Gibson says he has no excuses to offer for the "hiding" his depleted side has taken from a rampaging India, leaving him with a lot to think about going forward. 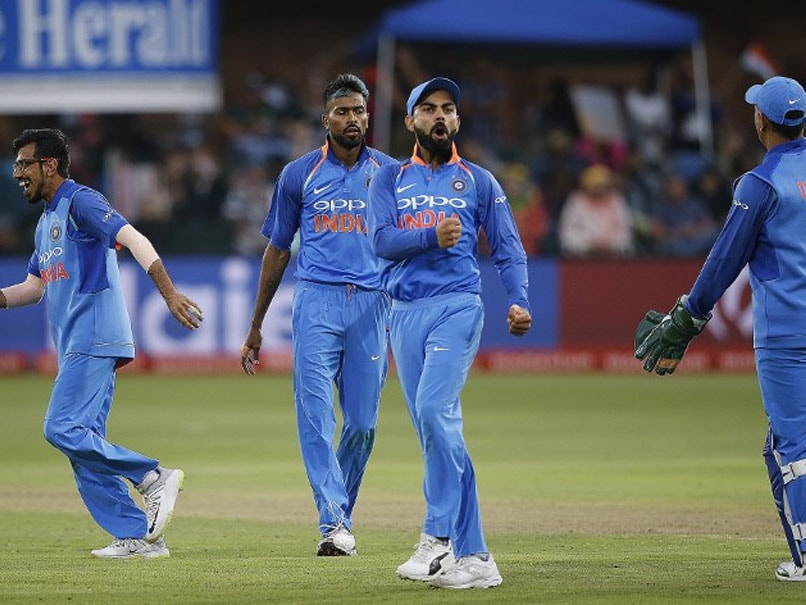 Team India created history as they clinched their first ever bilateral ODI series win on South African soil by beating the Proteas by 73 runs in the fifth One-day International (ODI) at St George's Park on Tuesday. India wrist spinners Kuldeep Yadav and Yuzvendra Chahal wreaked havoc as the South Africans were skittled for 201 in 42.2 overs after India had posted 274 for seven. Kuldeep accounted for four South African wickets while Chahal picked two as the South Africans struggled on a slow track in Port Elizabeth. The Kohli-led team has taken an unassailable 4-1 lead in the six-match ODI series. A disappointed South Africa coach Ottis Gibson says he has no excuses to offer for the "hiding" his depleted side has taken from a rampaging India, leaving him with a lot to think about going forward.

"You take three of your best batsmen out of any team, they will struggle and when you do it against a very strong Indian team it has exposed us. I've told the lads in dressing room we will not make excuses but will try and get better. We have got a good hiding from India, let us not kid ourselves about that, but it has also given us a lot of food for thought going forward," said Gibson at the post-match conference.

"I know we have been focusing on the World Cup, but I don't think the team that will go to that tournament is the one that you saw tonight," he added.

Gibson also conceded that India's wrist spin pair of Chahal and Yadav have tormented his side in this ODI series but felt they may not be that useful in the World Cup in England.

"I think India has two world-class spinners and they might spin it anywhere, but we have got a whole year to learn to deal with that stuff. But I don't believe it will spin that much in England," he said.

He felt his batsmen let the team down at crucial junctures through the entire ODI series, particularly in the fifth match here.

"We were optimistic the series was still there to be drawn. To bowl India out for 270-odd was a great effort from the bowlers and we let ourselves down with the bat.

"You want to have a group of players who can adapt to certain conditions and play accordingly. We know we have those players but they have not produced it in this series, which is disappointing. We succumbed quite easily tonight," the coach said.

South Africa managed to restrict India under 300 for the second game running, but 275 proved to be a tall ask with the Indian wrist-spinners coming back to form once again. This was despite Hashim Amla's anchoring 71-run knock. But once he was run out, the Proteas collapsed again.

"We were 50 for none and lost a wicket with four balls to go in Power Play to Jasprit Bumrah who has been their best fast bowler all summer. We lost a couple more shortly thereafter and that set us back.

"Hashim (Amla) worked really hard to rebuild but every time we rebuilt we lost wickets. With four bowlers, we needed our best six or seven batsmen to bat the bulk of overs and they were not able to do that tonight," he said.

Gibson said on the contrary the Indian top-order made the difference in the ODI series by scoring the bulk of runs.

"A lot of credit has to go to India. In every game, one of their top three (batsmen) has scored a hundred and that is been the difference in the series. We've got one hundred from captain Faf du Plessis in Durban, and we've not been able to get another since. It's not that we can't."

Gibson lamented that injuries cost South Africa in the series and hampered their preparation for the 2019 World Cup as they looked to try out new faces. At the same time, he added that stand-in skipper Aiden Markram would not be judged too harshly on this result after he took over from injured Faf du Plessis.

Comments
Topics mentioned in this article
South Africa Cricket Team India Cricket Team Virat Kohli Aiden Markram Ottis Delroy Gibson St George's Park, Port Elizabeth South Africa vs India 2018 Cricket
Get the latest updates on IND vs NZ 2021, check out the Schedule and Live Score . Like us on Facebook or follow us on Twitter for more sports updates. You can also download the NDTV Cricket app for Android or iOS.