Shikhar Dhawan and Rohit Sharma's selection in the first Test against South Africa at Newlands, Cape Town has come under the microscope after India lost by 72 runs. 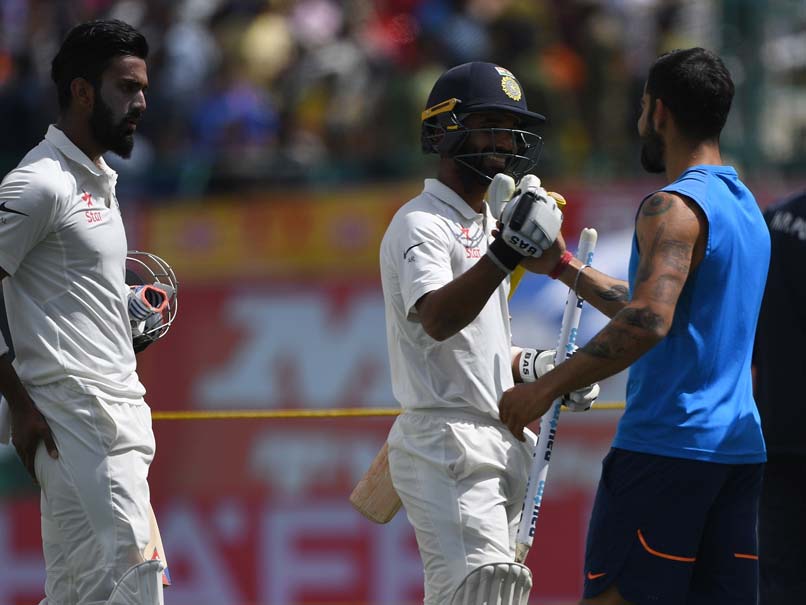 Shikhar Dhawan and Rohit Sharma's selection in the first Test against South Africa at Newlands, Cape Town has come under the microscope after India lost by 72 runs. The Indian team management decided to go with Dhawan and Rohit instead of KL Rahul and Ajinkya Rahane. While Rahane has a very good record overseas, Rahul has done really well in Test cricket in the last couple of years. Dhawan looked out of sorts and scored 16 in both the innings while Rohit too failed to make any real contribution with the bat. The Mumbai Indians captain was dismissed for 11 in the first innings and 10 in the second. Following India's defeat, fans took to Twitter to make their displeasure with the team selection known and called for the recall of Rahane and Rahul.

Even Einstein can't explain the theory of playing Rohit Sharma in the overseas condition.??#INDvSA#SAvsIND

It may offend some fans but Rohit and Shikhar aren't a test material. #INDvSA

Having Lost This One Already. 2 Changes We Need In The Next Match:
??KL Rahul For Shikhar Dhawan
??Ajinkya Rahane For Rohit Sharma

Wonder if Shikhar Dhawan is a good choice in such conditions. Isn't he a high risk gamble? Rohit Sharma's place must also be on the line. Let's see if changes are made for the Centurion Test. Rahul & Rahane in as many are saying? #INDvSA

Rahane has been out of form and did not have the best of series against the visiting Sri Lankans in December. However, he still has one of the best averages for an Indian batsman outside of the country.

The Indian top-order found itself in a lot of discomfort against the moving ball and the extra bounce produced by Morne Morkel was also a problematic area for the Indians.

Apart from Hardik Pandya' brilliant counter-attacking knock of 93, the Indians failed to get their act together with the bat as none of the other batters looked anywhere close to coming to terms with the seam movement of the Newslands track.

Indian captain Virat Kohli looked good in the second innings only to be dismissed by Vernon Philander while Ravichandran Ashwin kept the Indian hopes alive after stitching a 49-run eighth wicket stand with Bhuvneshwar Kumar.

In the end, the target of 208 was too stiff for the Indians and the visitors were bowled out for 135 in the second innings, falling well short of the target.

Comments
Topics mentioned in this article
India Cricket Team South Africa Cricket Team Lokesh Rahul Ajinkya Rahane Newlands, Cape Town South Africa vs India 2018 Cricket
Get the latest updates on ICC T20 Worldcup 2022 and CWG 2022 check out the Schedule, Live Score and Medals Tally. Like us on Facebook or follow us on Twitter for more sports updates. You can also download the NDTV Cricket app for Android or iOS.