NZ vs IND: Prithvi Shaw, playing his first Test since doping ban, got off to positive starts but couldn't make it count on both occasions. 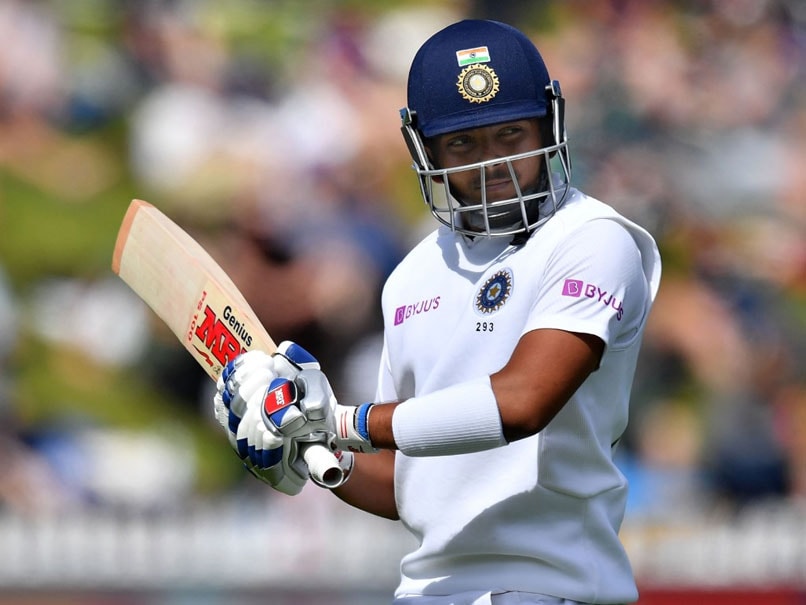 NZ vs IND: Prithvi Shaw got out after playing a poor shot in the second innings.© AFP

Prithvi Shaw, playing his first Test since doping ban, failed in both the innings of the ongoing first Test against New Zealand at Basin Reserve in Wellington. Opening the innings, Shaw got off to positive starts but couldn't make it count on both occasions. Shaw's technique received scathing remarks from fans on social media. After Shaw managed scores of 16 and 18 in the two innings, some fans even demanded Shubman Gill, who was in a terrific form in the warm-up games, be included ahead of him in the Test side.

"Prithvi Shaw has been so scrappy and shitty in both the innings, how does he get to open for India? Oh yeah arm chair experts, silly commentators, selectors and Mumbai board ensures that I guess #NZvIND," wrote one fan.

"Prithvi Shaw has batted 5 innings in this NZ tour and only once he has scored more than 30 and the highest score has been 40. #NZvIND," wrote another.

There were a few who took a hilarious dig at Shaw getting out of Trent Boult in both the innings.

This is how Trent Boult dealt with Prithvi Shaw.#NZvIND pic.twitter.com/5SHD2srUuU

After Shaw's dismissal, his opening partner Mayank Agarwal stood alone with a half-century as India lost wickets at regular intervals in their quest to wipe out a 183-run first-inning deficit.

At tea on day three, the visitors were 78/2 with Agarwal batting on 52.

However, in the final session India suffered a huge blow as Agarwal edged a wayward delivery, bowled on the leg stump, straight to the wicket-keeper trying to flick it off his pads.

And soon after, India captain Virat Kohli was dismissed for 19 to leave India tottering at 113/4.

Before his dismissal, however, Agarwal's composed batting was the positive sign for India. However, earlier in his innings he twice escaped trouble when he played uppishly towards the three catchers stationed in front of the batsman on the off-side.

But after that he batted with great control and brought up his third Test half-century turning Ajaz Patel to the fine-leg boundary as India slowly clawed their way back into the match.

Cheteshwar Pujara was bowled by Trent Boult for 11 on the last ball before the interval.

He had only just started scoring freely after facing 28 dot balls and receiving loud applause when he ended the drought with a two off Boult.

The promising Prithvi Shaw, in his first Test since serving an eight-month doping ban, was the first wicket to fall as he had been in the first innings.

On 14 he turned a Boult inswinger and was caught by a diving Tom Latham at backward square leg.

It was a questionable shot at a time when India needed patience after letting Kyle Jamieson mount a rearguard assault which gave New Zealand a comfortable first innings lead.

Jamieson, only selected for his maiden Test while Neil Wagner is on paternity leave, has been the headline performer for New Zealand.

He followed up taking four for 39 with an entertaining 44 off 45 deliveries with the bat when the New Zealand innings was teetering.

From being 225/7, New Zealand were eventually all out for 348 with Trent Boult adding a rollicking 38 off 24 balls while Colin de Grandhomme contributed 43 at a more sedate pace.

Jamieson, who blasted four sixes in his whirlwind knock and was caught going for a fifth, put on 71 with de Grandhomme for the eighth wicket.

Ishant Sharma was the most successful of the Indian bowlers with 5/68 while Ravi Ashwin took 3/99.

Trent Boult
Get the latest updates on Fifa Worldcup 2022 and check out  Fifa World Cup Schedule, Stats and Live Cricket Score. Like us on Facebook or follow us on Twitter for more sports updates. You can also download the NDTV Cricket app for Android or iOS.