A cricket board official has questioned the back-dating of Prithvi Shaw's ban on account of failing a dope test, which sees him play the IPL during the ban period. 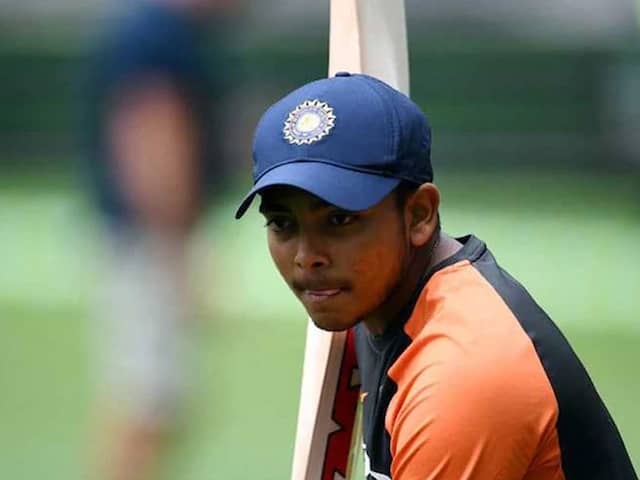 Prithvi Shaw's period of ineligibility has been deemed to have started on March 16.© AFP

Prithvi Shaw was handed an eight-month ban by the Board of Control for Cricket in India (BCCI) after he failed a dope test on Tuesday. BCCI's decision to back-date Shaw's ban to March hasn't gone down well with some officials as during that period he played for his franchise Delhi Capitals in Indian Premier League (IPL), IANS reported. As per a BCCI media release, Shaw's period of ineligibility has been deemed to have started on March 16, meaning his eight-month ban will end on November 15, 2019.

Speaking to IANS, a senior BCCI official pointed at the ruling and said that this decision just doesn't seem right because what this provision -- as per BCCI Anti-Doping Rule (ADR) Article 10.10.2 -- also means is that he played the IPL during the mentioned period of ineligibility.

Another official pointed out how the episode highlights Shaw's lack of awareness in not checking on the ingredients in the medicine that he brought over the counter.

"It is a major embarrassment that an Indian player buying medicines over the counter did not have the good sense to call the anti-doping helpline to check the salt of the medicine before ingesting it," the official said.

Shaw had provided a urine sample as part of the BCCI's anti-doping testing program during the Syed Mushtaq Ali Trophy match on February 22 in Indore.

His sample was subsequently tested and found to contain Terbutaline, a specified substance prohibited both In & Out of Competition in the WADA Prohibited List of Substances.

On July 16, Shaw was charged with the commission of an Anti-Doping Rule Violation (ADRV) under the BCCI ADR Article 2.1 and provisionally suspended pending determination of the charge. Shaw responded to the charge by admitting the ADRV but asserting that it was inadvertent, being caused by his ingestion of the over the counter cough syrup he had taken for his cough.

India Cricket Team Prithvi Shaw BCCI Cricket
Get the latest updates on IPL 2020, check out the IPL Schedule for 2020 and Indian Premier League (IPL) Cricket live score . Like us on Facebook or follow us on Twitter for more sports updates. You can also download the NDTV Cricket app for Android or iOS.