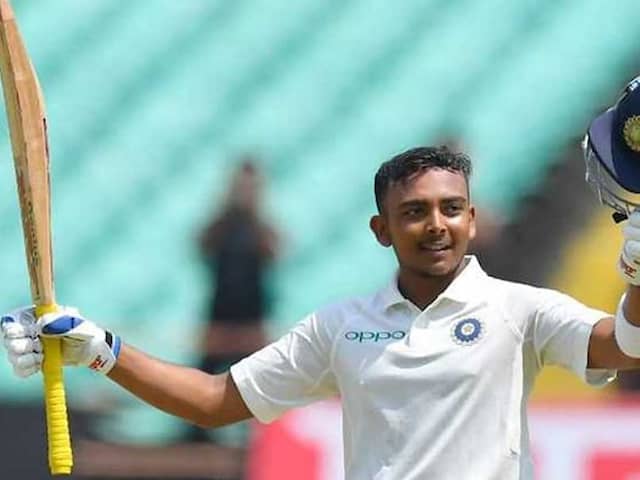 Prithvi Shaw made a fine 71 for Mumbai. (Representational Image)© AFP

Young prodigy Prithvi Shaw found his mojo back as domestic giants Mumbai Monday cantered to a fourth straight win in the Syed Mushtaq Ali Trophy, hammering Goa by six wickets in a Group C game of the T20 tournament in Indore. Earlier, Mumbai had defeated Sikkim, Punjab and Madhya Pradesh in the premier domestic T20 tournament. Mumbai rode on Shaw's blazing 71 off just 47 balls to reach the target of 140 with 10 balls to spare. Shaw, who struggled in the last three games, finally found momentum and registered his first fifty of the tournament.

The 19-year-old batsman's quickfire knock was studded with five boundaries and seven sixes. Skipper Ajinkya Rahane (31) played his part to perfection as the duo laid the foundation stone of the win with a 95-run opening stand.

Mumbai slumped to 117/4 from a healthy 95/1 but experienced Surya Kumar Yadav (24 not out) steered the side home at the Emeralds Heights International School Ground.

Earlier, Mumbai bowlers did a decent job to restrict Goa to 140 for 4 in their 20 overs.

Goa openers Sagun Kamat (27) and skipper Amogh Desai (38) got starts but were unable to convert them into big scores.

The duo added 58 runs for the first wicket, but both fell in quick succession. One-down Amit Verma (27) and wicket-keeper Keenan (26) were also looking good, but Mumbai bowlers sent them back to the pavilion before they could consolidate further.

Dhawal Kulkarni Cricket
Get the latest Cricket news, check out the India cricket schedule, Cricket live score . Like us on Facebook or follow us on Twitter for more sports updates. You can also download the NDTV Cricket app for Android or iOS.