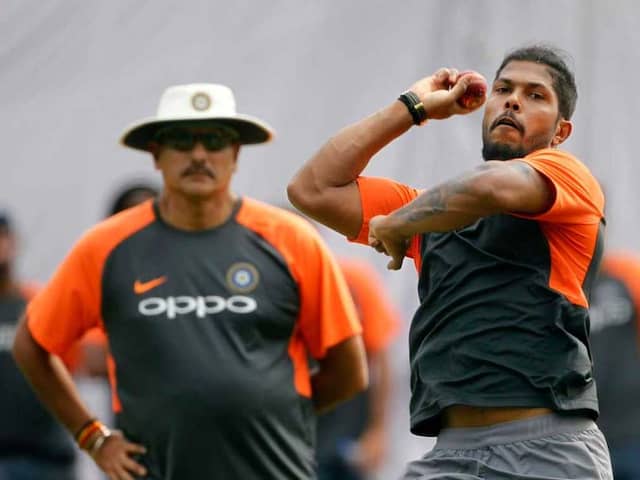 Pacer Umesh Yadav will replace the injured Shardul Thakur in the 14-man squad for the first two One-day Internationals (ODIs) against the Windies, the Board of Control for Cricket in India (BCCI) announced on Tuesday. Thakur walked out of the field and did not bowl in the entire match after suffering a groin injury in his debut Test at Hyderabad. Taking his injury into consideration, BCCI has named Umesh Yadav as his replacement in the limited over series scheduled to begin from October 21 in Guwahati. Yadav, who was not included in the team for the Asia Cup has been brought back after his match winning performance in the in the second Test against the Windies.

"The All-India Senior Selection Committee has named Umesh Yadav as Shardul Thakur's replacement in India's squad for the first two ODIs against Windies. Mr Thakur suffered a right adductor tendon injury and has been ruled out of the Paytm ODI series," BCCI said in its statement.

Yadav, last represented India in limited-overs cricket against England in July where he played two ODI matches at Nottingham and Lords. Yadav had a poor run in the series after which he was not included in the ODI team for the Asia Cup. But his recent form in the Test series made selectors pick him in the ODI team.

Yadav clinched 11 wickets in the recently concluded Test series against the Windies that included a 10-wicket haul in in the second Test in Hyderabad.

Umesh Yadav Shardul Thakur India vs West Indies 2018 Cricket India vs West Indies, 1st ODI
Get the latest Cricket news, check out the India cricket schedule, Cricket live score . Like us on Facebook or follow us on Twitter for more sports updates. You can also download the NDTV Cricket app for Android or iOS.