Shardul Thakur suffered a groin injury on the first morning of the second Test and walked out after bowling just 10 deliveries. 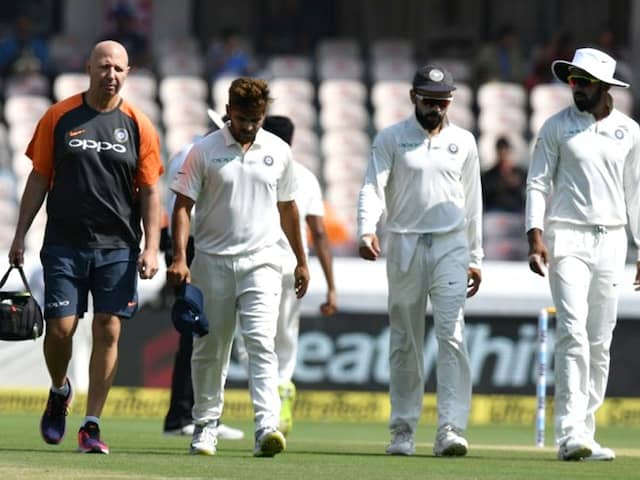 Shardul Thakur made his debut for India in the second Test against The Windies.© AFP

Shardul Thakur made his debut for India against the Windies in the second Test at the Rajiv Gandhi International stadium in Hyderabad on Friday. But the first game for the 26-year-old, didn't work out as planned as the bowler suffered a groin injury right at the start of the match. Thakur walked out of the park after just bowling 10 deliveries in the morning session. The Board of Control for Cricket in India (BCCI) later in the afternoon shared the details on Thakur's injury.

"Shardul Thakur has gone for scans. He will not take the field today. An update on his participation for the rest of the Test will be taken after looking at the scans and after being assessed by the team management," ANI quoted BCCI as saying.

The incident happened in the fourth over of the morning session. After bowling the fourth delivery of his second over, Thakur was seen struggling and was really uncomfortable at the middle. Team physio Patrick Farhart went out in the middle to look at the seriousness of the injury and moments later Thakur was seen taking the walk back towards the dressing room.

Earlier, ahead of the start of the play on Day 1, Shardul Thakur received his Test cap from head coach Ravi Shastri. Thakur became the 294th player to represent India in Test cricket.

Proud moment for @imShard as he receives his Test cap from @RaviShastriOfc, becomes the 294th player to represent #TeamIndia in Tests.#INDvWI pic.twitter.com/2XcClLka9a

The Windies team, already trailing 0-1 in the 2-match Test series against India, ended Day 1 of the second Test with 295 runs on the board for the loss of seven wickets. Roston Chase (98) and Devendra Bishoo (2) were unbeaten when the umpires decided to call off the day's play.

Rajiv Gandhi International Stadium, Hyderabad India vs West Indies 2018 India vs West Indies, 2nd Test Cricket
Get the latest Cricket news, check out the India cricket schedule, Cricket live score . Like us on Facebook or follow us on Twitter for more sports updates. You can also download the NDTV Cricket app for Android or iOS.