NZ Vs IND 1st Test Day 1 Highlights: New Zealand had the advantage after the first day's play, reducing India to 122/5. 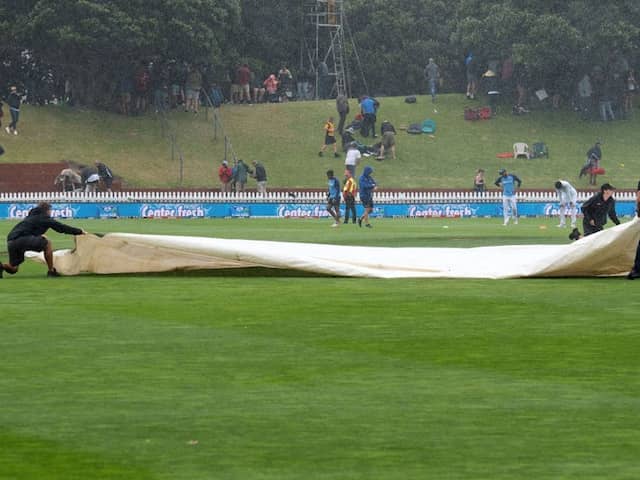 NZ Vs IND Highlights: Rain caused play to be called off early.© AFP

Play was called off early on Day 1 of the first Test between New Zealand and India as rain set in during Tea. India were left struggling at 122/5 after the first two sessions, with Ajinkya Rahane batting on 38 with Rishabh Pant for company. After winning the toss and electing to bowl, New Zealand got off to a brilliant start. Tim Southee removed Prithvi Shaw early for 16 and debutant Kyle Jamieson bowled a dream first spell as he sent both Cheteshwar Pujara and Virat Kohli packing. Ajinkya Rahane and Mayank Agarwal then put their foot down and built up a decent partnership, taking India to 79/3 at Lunch. Trent Boult struck soon after the second session resumed when Agarwal top-edged a pull shot to Jamieson. Jamieson's dream debut continued as he then got Hanuma Vihari to edge one to BJ Watling. Ajinkya Rahane carried on fighting and he reached Tea with 38 runs in the belt, partnered by Rishabh Pant. Ross Taylor, playing his 100th Test, will be pleased too, having taken the catch to dismiss Virat Kohli. (SCORECARD)

Kane Williamson New Zealand vs India, 2020 Cricket New Zealand vs India, 1st Test Live Blogs Live Score Live Cricket Score
Get the latest Cricket news, check out the India cricket schedule, Cricket live score . Like us on Facebook or follow us on Twitter for more sports updates. You can also download the NDTV Cricket app for Android or iOS.