IPL 2022: KL Rahul and Krunal Pandya were not happy with a no-ball call for height after Dushmantha Chameera bowled a full toss to Rajat Patidar. 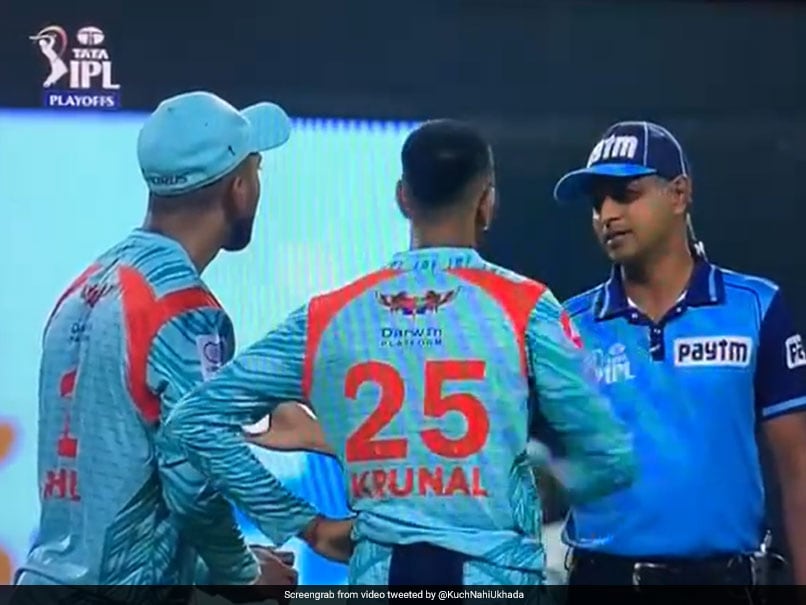 IPL 2022: KL Rahul and Krunal Pandya had a lengthy discussion with the umpire.© Twitter

There have been quite a few incidents in the Indian Premier League (IPL) 2022 where players were not happy with the umpire's decision. The Eliminator between Lucknow Super Giants and Royal Challengers Bangalore also saw such a similar incident. It happened in the 12th over of Royal Challenegers Bangalore's innings with Lucknow Super Giants' Dushmantha Chameera bowling. On the first ball, the Sri Lankan bowled a high full toss to Rajat Patidar that was immediately called for a no-ball by leg umpire Michael Gough, and his colleague J Madanagopal also signalled a no-ball at the non-striker's end.

After that Krunal Pandya and LSG skipper KL Rahul could be seen having a lengthy discussion with Madanagopal. Gough then signalled that it was his call and then Rahul looked liked asking Gough if the decision could be referred to third umpire. Pandya also could be seen shaking his head in disappointment. Even LSG head coach Andy Flower and the rest of the camp were frustrated. The over ultimately resulted in 16 runs.

In the match, little-known domestic bulwark Rajat Patidar found his hour of fame as his magnificent 49-ball hundred propelled Royal Challengers Bangalore to an imposing 207 for 4 against Lucknow Super Giants. Courtesy Patidar's 54-ball-112 not out which had 12 fours and seven huge sixes, RCB literally knocked the stuffing out of the LSG attack with Mohsin Khan's superb 1 for 25 proving to be only saving grace.

On a day their famed batting trio of Faf du Plessis (0), Glenn Maxwell (9) and Virat Kohli (25) failed to enthrall a capacity Eden crowd, RCB's No, 3 played out of his skin as 90 runs came in fours and sixes off just 19 balls.

While most of the star-studded RCB batters struggled for timing, the 28-year-old looked effortless with his slices, punches, counter-punches and drives to tower over the rest.

And to make Patidar's story more interesting, he wasn't picked from auction this season and joined the team after start when a player called Luvnith Sisodia was injured.

Had Sisodia been alright, RCB wouldn't have required services of Patidar, who made 65,000 at Eden Gardens stand on their feet.

He along with Dinesh Karthik (37 not out from 23 balls) put on a match-turning unbroken partnership of 92 runs from 41 balls as RCB scored 84 runs in the last five overs to prop up the total.

Josh Hazlewood and Harshal Patel then bowled brilliantly at the death to help restrict LSG to 193/6, registering a famous 14-run win that saw them through to Qualifier 2, where they will take on Rajasthan Royals for a spot in the final.

KL Rahul Krunal Pandya Rajat Patidar Dushmantha Chameera Cricket
Get the latest updates on ICC T20 Worldcup 2022, check out the Schedule and Live Score. Like us on Facebook or follow us on Twitter for more sports updates. You can also download the NDTV Cricket app for Android or iOS.