Watch: Riyan Parag Left Fuming After Run-Out Due To Mix-Up With Ravichandran Ashwin In IPL 2022 Qualifier 1

IPL 2022, Qualifier 1: Riyan Parag and Ravichandran Ashwin had a mix-up, leading to the former being run out. 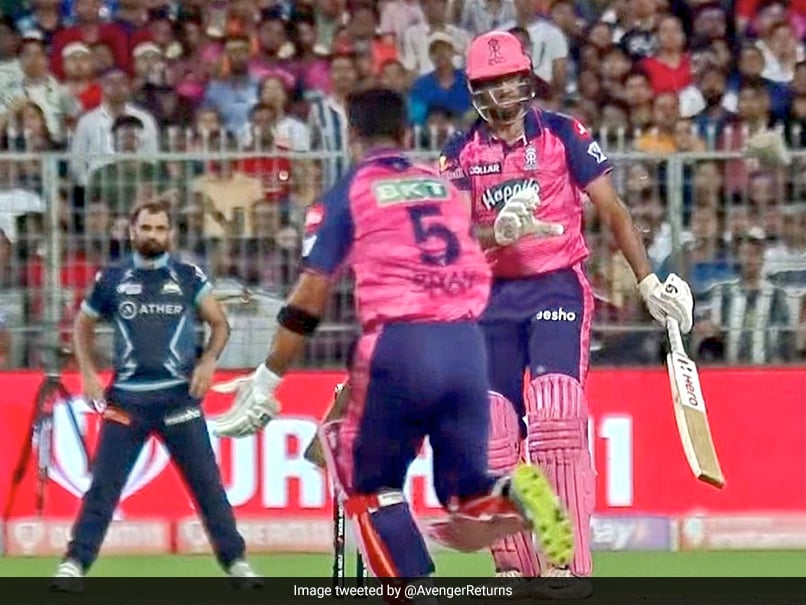 IPL 2022: Riyan Parag gestures towards Ravichandran Ashwin after he turned down a single.© BCCI/IPL

During the final over of Rajasthan Royals' innings against Gujarat Titans in Indian Premier League (IPL) 2022 Qualifier 1 on Tuesday, there was high drama after a mix-up saw Riyan Parag run-out at the non-striker's end. Jos Buttler was run-out off the final delivery of RR's 20th over, bowled by Yash Dayal, but it was a no ball, so the new batter Ravichandran Ashwin was facing a free hit, with Riyan Parag at the other end. Dayal bowled a wide and Parag, wanting to take strike to maximise the free hit, sprinted down to the striker's end. Ashwin, however, did not leave his crease.

As Wriddhiman Saha and Yash Dayal completed a simple run-out, Parag was seen holding out his arms in frustration as Ashwin gave him a shrug and walked away.

Parag looked rather angry as he walked back to the pavillion.

However, the target was not nearly big enough as Gujarat Titans never looked in trouble in their chase, despite Trent Boult sending Wriddhiman Saha packing in the first over.

Shubman Gill gave them impetus at the start, hitting 35 off 21. The young opener looked in sublime touch but his innings was cut short by a mix-up with Matthew Wade that led to a run-out.

But then, Hardik Pandya and David Miller put on a 106-run partnership from exactly 10 overs to guide the Titans to the final in their debut IPL season.

While Hardik was the aggressor initially, Miller took over once he settled in and finished with an unbeaten 68 off 38, that also saw him hit three back-to-back sixes off Prasidh Krishna in the final over to seal the win, with the Titans needing 16 off the last six.

Ravichandran Ashwin Yash Dayal Gujarat Titans vs Rajasthan Royals, Qualifier 1 Cricket
Get the latest updates on ICC T20 Worldcup 2022, check out the Schedule and Live Score. Like us on Facebook or follow us on Twitter for more sports updates. You can also download the NDTV Cricket app for Android or iOS.