IPL 2021:Ravindra Jadeja produced two magical moments in the field to get rid of dangerous KL Rahul and Chris Gayle. He dismissed Punjab Kings skipper with a brilliant direct hit and then took a sensational diving catch to remove Gayle. 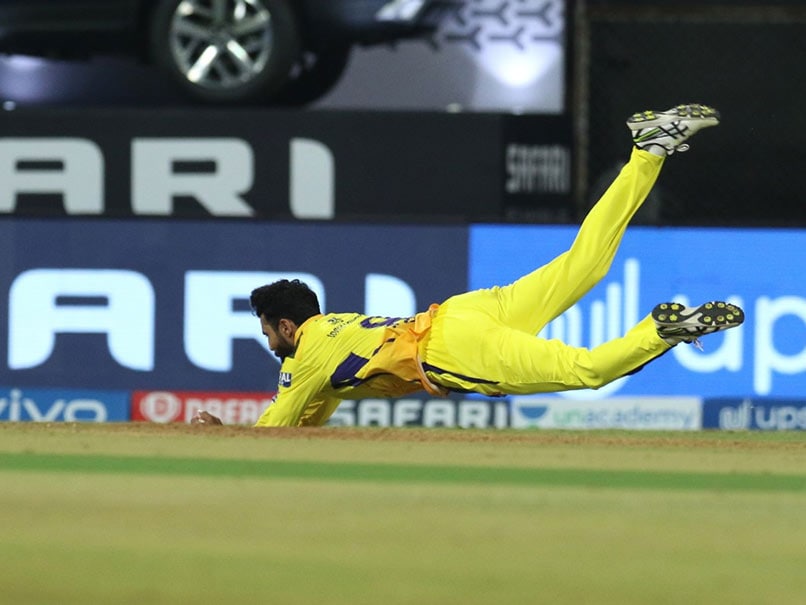 IPL 2021: Ravidra Jadeja was on fire in the field against Punjab Kings.© BCCI/IPL

Ravindra Jadeja, regarded by many as India's best fielder, produced two magical moments in the field to get rid of dangerous KL Rahul and Chris Gayle in Match 8 of the Indian Premier League (IPL) 2021 at the Wankhede stadium on Friday. The all-rounder first dismissed the Punjab Kings skipper with a brilliant direct hit and then took a sensational diving to get rid of Chris Gayle. While KL Rahul departed for five runs, Gayle could only manage 10 runs before Jadeja's brilliance sent  him packing off Deepak Chahar's bowling.

Jadeja got rid of KL Rahul with a bullet throw

Jadeja pulled off a sensational catch to dismiss Chris Gayle

Sir Jadeja has mastered the art of fielding. His squad can always rely on him for catching a ball. He has also shown off his fielding skills in the field too. Undoubtedly, he is one of the finest fielder

First with run out, second with this catch! Wonder. pic.twitter.com/mRpL3OhJFI

Watching Jadeja effect two brilliant dismissals without even bowling, the fans were hugely impressed and they flocked social media to praise his electric fielding.

We won't be surprised even if 'Sir #Jadeja is fielding on boundary & takes a catch at slip.'
THE BEST #CSKvPBKS pic.twitter.com/qv48nJn25U

If fielding is an art, Sir Jadeja is the Picasso of it, period !#jadeja #PBKSvsCSK #CSK pic.twitter.com/ZzYUsFohDp

KL knew at that moment when he saw Jadeja, it's over. pic.twitter.com/RGvssOgPq6

Sie Jadeja to KXIPB batsman while trying to run for a single pic.twitter.com/pfUihuZGWx

Taking inspiration from his own fielding, Jadeja then bowled a tidy spell, conceding just 19 runs in his four overs. He also took a good catch in the deep to dismiss Punjab Kings top-scorer Shahrukh Khan, who fought a lone battle and scored 47 off 36 balls, helping his side cross the three-figure mark.

Wankhede IPL 2021 Cricket Punjab Kings vs Chennai Super Kings, Match 8
Get the latest updates on ICC T20 Worldcup 2022, check out the Schedule and Live Score. Like us on Facebook or follow us on Twitter for more sports updates. You can also download the NDTV Cricket app for Android or iOS.