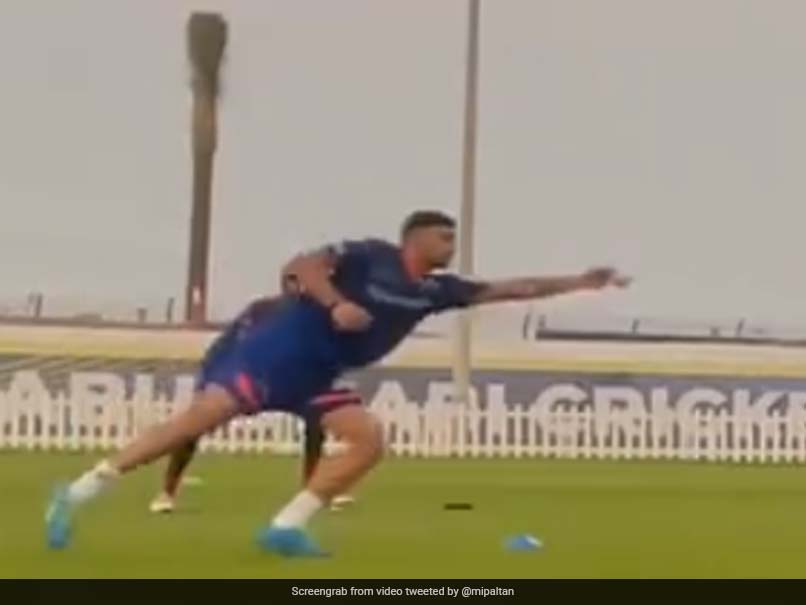 Young Mumbai Indians (MI) cricketer Yudhvir Singh Charak impressed one and all with his acrobatic fielding skills during the team's training session in the United Arab Emirates (UAE). The Rohit Sharma-led team is currently in the UAE for the resumption of IPL 2021, which is slated to begin on September 19. Ahead of the resumption of the tournament, Mumbai Indians' players and staff are leaving no stone unturned in their preparation for the marquee event. On Monday, a couple of young guns in the MI squad were seen fine-tuning their catching skills under the supervision of fielding coach James Pamment.

During the fielding drill, Yudhvir grabbed everyone's attention after taking a sensational catch. The video of the same was posted on the official Instagram handle of Mumbai Indians.

The video starts with Yudhvir taking part in fielding drills.

In the footage, the 24-year-old is seen catching the first ball that comes to him with utmost ease. After seeing that, the fielding coach upped his ante by throwing the ball away from the Hyderabadi cricketer.

Cricket enthusiasts were elated to watch the Yudhvir's athleticism and soon the comment section of the post was filled with fire and red-heart emojis.

In another post, Mumbai also wished Yudhvir on his birthday by sharing a snap of him in the team's practice jersey.

Mumbai Indians will kick off the proceedings of the second phase of IPL 2021 on September 19 when they take on Chennai Super Kings (CSK) at the Dubai International Cricket Stadium.

Mumbai Indians Yudhvir Singh IPL 2021 Cricket
Get the latest updates on T20 World Cup, check out the T20 World Cup Schedule and Live Score . Like us on Facebook or follow us on Twitter for more sports updates. You can also download the NDTV Cricket app for Android or iOS.