"Why So Serious?" Ravichandran Ashwin Asks On Ajinkya Rahane's Pic. His Response

IPL 2021: Ajinkya Rahane is almost a little too serious in his demeanour but he had a perfect answer for Ravichandran Ashwin in their little Instagram banter. As the players gear up for the IPL 2021, they have to follow strict bio-bubble rules as mandated by the cricket board and their respective franchises, which leads to most of them missing the outside life. Delhi Capitals batsman Ajinkya Rahane posted an old picture where he is all dressed up and posing for a photo-shoot. "Back from the days out of the bubble, when getting ready and posing for pictures was a thing!" wrote Rahane as he posted the picture on Instagram. However, his DC teammate Ravichandran Ashwin decided to pull his leg and asked him the reason behind his serious look and where was his "million-dollar smile". "Why so serious buddy?? Where is that million dollar smile?" Ashwin commented on Rahane's post.

However, Rahane won the fun banter with a smart reply as he credited Ashwin for his smile and wrote: "@rashwin99 That comes with you in the bubble". 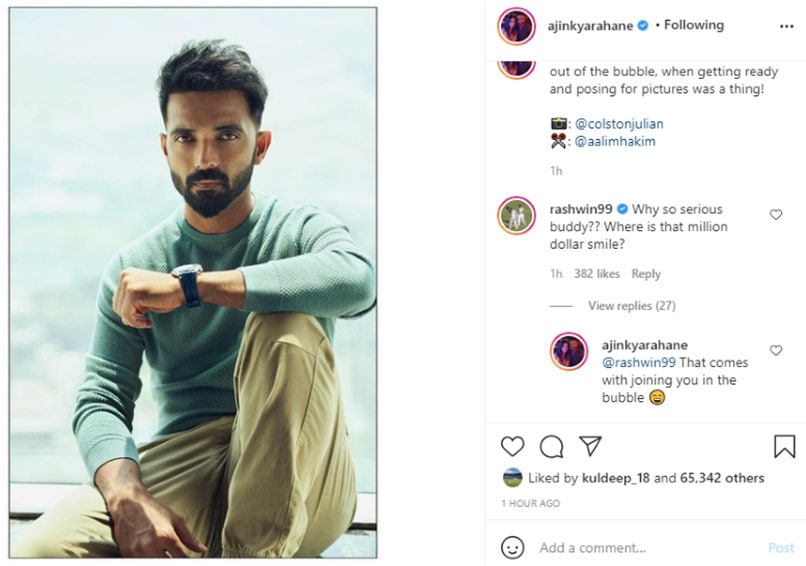 Rahane and Ashwin, who were both last seen in action during the Test series against England, will return to the field for Delhi Capitals, which will be led by Rishabh Pant in the upcoming edition.

With only a few days left in the IPL 2021, the players are all geared up for yet another action-packed season of the IPL and both Rahane and Ashwin are giving their all in the nets to prepare themselves for the tournament.

On Tuesday, Delhi Capitals posted a fun video of Ashwin dancing on a famous Tamil song during his gym session. Earlier this week, Ashwin and Rahane were spotted playing box cricket during a promotional shoot with their skipper Rishabh Pant.

Rishabh Pant IPL 2021 Cricket
Get the latest updates on India vs South Africa and check out  Schedule, Results and Live Score. Like us on Facebook or follow us on Twitter for more sports updates. You can also download the NDTV Cricket app for Android or iOS.