IPL 2021: The Chennai Super Kings competition extends beyond the cricket ground, as Ruturaj Gaikwad and Sai Kishore display in this video. 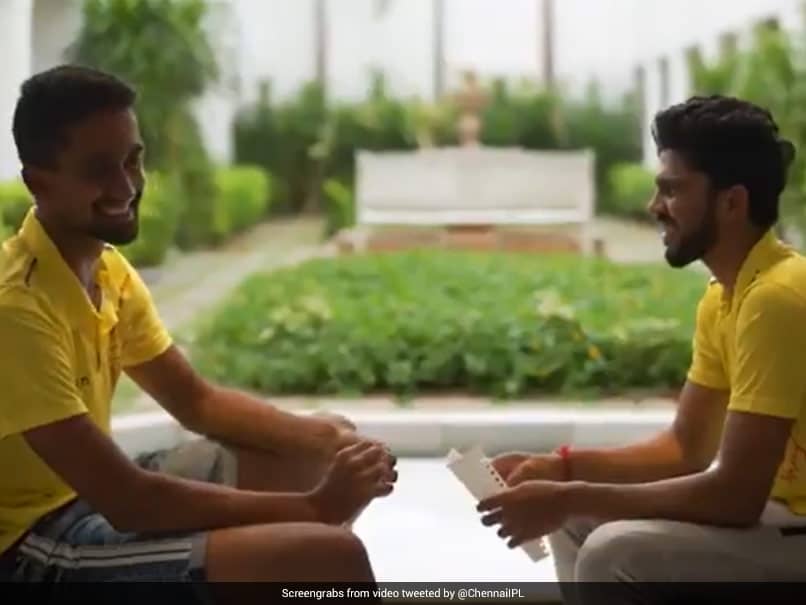 Chennai Super Kings' Ruturaj Gaikwad and Sai Kishore, on Tuesday, went head-to-head with each other during a 'you laugh, you lose' challenge. Chennai Super Kings (CSK) shared a clip on its official Twitter handle, where Gaikwad and Kishore were reading out jokes from a cue card. According to the rules of the game, if a person is laughing at a joke read by other contestants, he would lose a point. "Strictly not for laughing! Si-rut-cha pochu ft. with our Lion to add some smiles to your day," CSK captioned the video on Twitter.

Both Gaikwad and Kishore asked each other a series of silly questions and then gave a comical answer to make each other laugh. However, in the end, Gaikwad won the challenge 2-0 as he was able to make Sai Kishore laugh on two occasions. On the other hand, Kishore was not able to get Gaikwad to smile even once at his jokes.

After explaining the rules of the game, Kishore asked Gaikwad the first question, "why was the stadium so hot?" In response, Gaikwad said, "Maybe, because I was there." Kishore then explained to him, "it was hot because there were no fans."

During their challenge, Gaikwad even made fun of Kishore by calling him a "bad-tail-ender" and comparing him with a "racing car", saying "you blink and you miss them".

It seems Gaikwad and Kishore shared an excellent rapport, and their camaraderie was on full display in the video.

MS Dhoni's Chennai Super Kings will next take on David Warner's Sunrisers Hyderabad in the 23rd match of the Indian Premier League (IPL) on Wednesday in New Delhi. Chennai are placed at the second spot in the IPL table with eight points from five games. On the other hand, SRH are sitting at the bottom of the table with one win from five games.

Chennai Super Kings Ruturaj Gaikwad Ravisrinivasan Sai Kishore IPL 2021 Cricket
Get the latest updates on IPL 2021, IPL Points Table , IPL Schedule 2021 , live score . Like us on Facebook or follow us on Twitter for more sports updates. You can also download the NDTV Cricket app for Android or iOS.