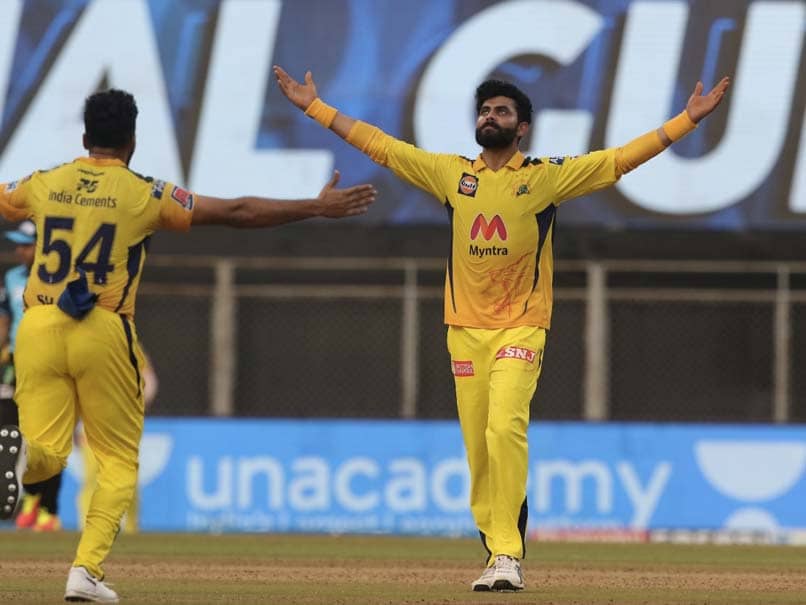 CSK vs RCB: Ravindra Jadeja celebrates a wicket during Match 19 of IPL 2021.© BCCI/IPL

The irrepressible Ravindra Jadeja blasted an IPL record-equalling 37 runs in one over and then grabbed three big wickets in an outstanding all-round display as Chennai Super Kings crushed Royal Challengers Bangalore by 69 runs, on Sunday. Jadeja pummelled 62 off 28 balls and lifted CSK to 191 for four after skipper Mahendra Singh Dhoni opted to bat in a top-of-the-table clash. Then, with his slow-left arm spin bowling, the star all-rounder picked up the important wickets of AB de Villiers and Glenn Maxwell to derail RCB's run chase on a sluggish Wankhede pitch.

After a cracking start that saw them cross 50 in five overs, RCB were stopped at 122 for nine in 20 overs. The immensely-talented Devdutt Padikkal top-scored with a blazing 34 off just 15 balls.

Veteran South African leg-spinner Imran Tahir (2/16) picked up two wickets for CSK while giving away very few runs. Jadeja began the final over of CSK innings by clobbering four consecutive sixes off Harshal Patel before adding another off the fifth ball. He smashed the last ball over square leg for four as Harshal, who had figures of 3 for 14 going into the final over, finished with 4-0-51-3.

Jadeja, batting at No.5, was yet to open his account when he was dropped by Dan Christian off Washington Sundar. Playing for RCB, Chris Gayle had also scored 37 runs, against Kochi Tuskers Kerala in the 2011 edition, the bowler being Prasanth Parameswaran on that occasion.

The left-handed Jadeja made full use of the reprieve to ruin what was turning out to be an excellent outing for purple cap holder Harshal, Patel, with his brutal last over onslaught. With CSK placed at 154/4 when Harshal was handed the ball, Jadeja hit the first four balls for towering sixes and followed them with another maximum and a boundary in the seven-ball final over.

Skipper Mahendra Singh Dhoni remained not out on 2. Jadeja's assault came after the RCB bowlers -- Patel and Mohd Siraj (0/32) -- had kept CSK in check. Earlier, a second straight half-century for Faf du Plessis (50 off 41 balls) propelled CSK before Harshal delivered a double blow for RCB in the 14th over, getting rid of Suresh Raina (24) and the former South African captain off successive deliveries.

Raina belted three sixes during his 18-ball knock which gave CSK the move-on after the openers had set up a good platform with a 74-run partnership. Ambati Rayudu, who came in at No.4, hit a huge six in his 14 and looked good for more before he holed out off Harshal's bowling a few deliveries after appearing to have hurt himself while stretching to get back to the crease.

Batting first, Gaikwad and du Plessis never let go of a scoring opportunity and put away the bad deliveries. Gaikwad, who began slowly, caught up with the South African veteran with some superb shots. The CSK openers raced to 51 in six overs with du Plessis and Gaikwad matching each other shot for shot. The RCB pacers -- Kyle Jamieson and Mohammad Siraj -- could not make much of an impression.

Yuzvendra Chahal, introduced in the fourth over, too could not make an immediate impact. Chahal, though, managed to break the opening partnership in the 10th over by getting Gaikwad to miscue an attempted big shot which was caught by Jamieson. RCB capitulated after the exit of skipper Virat Kohli (8) and Padikkal, who provided a flying start by racing to 44 in three overs.

Padikkal looked in sublime touch as he hit boundaries effortlessly, sending two over the fence.

After Kohli fell to a slower ball from Sam Curran (1/35) and Padikkal was dismissed by Shardul Thakur (1/11), things went downhill for the Bengaluru team as it slipped to 81 for 5 in the 10th over.

Washington Sundar (7), who was promoted to the No.3 spot, could not make an impact and was Jadeja's first victim. Glenn Maxwell (22, 15 balls) threatened, albeit briefly, before being castled by Jadeja. De Villiers (4), on whom the team's hopes rested, was foxed by Jadeja, who got one to turn to dismiss the dangerous South African.

Ravindra Jadeja IPL 2021 Chennai Super Kings vs Royal Challengers Bangalore, Match 19 Cricket
Get the latest updates on IPL 2021, IPL Points Table , IPL Schedule 2021 , live score . Like us on Facebook or follow us on Twitter for more sports updates. You can also download the NDTV Cricket app for Android or iOS.