Virat Kohli Finding The Sweet Spot In Nets, Looks In Ominous Touch Ahead Of IPL 2020. Watch

Virat Kohli was seen middling the ball and looked in ominous touch in a video posted by RCB's official Twitter handle. 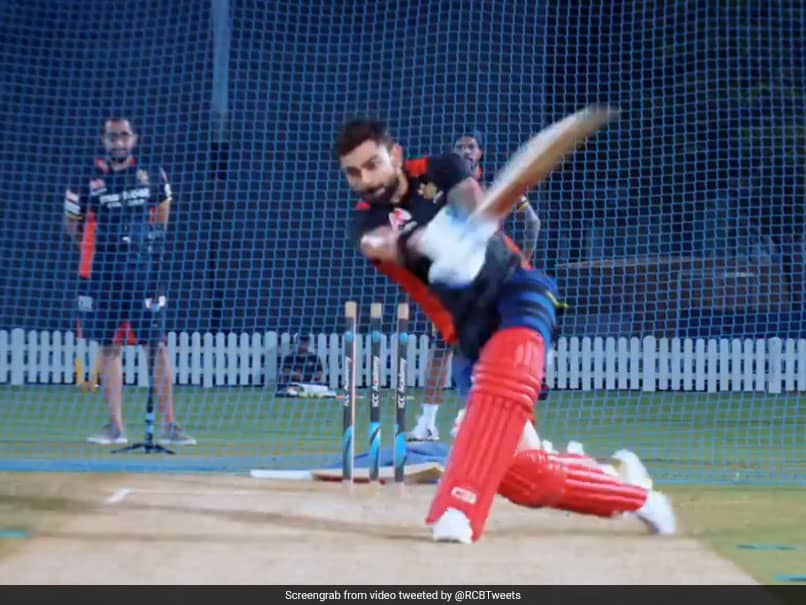 Virat Kohli can be seen playing a variety of shots during a nets session with several audacious strokes.© Twitter

Virat Kohli looks more intense, hungrier than ever before and even more balanced with every Royal Challengers Bangalore (RCB) training session, as visible in a video shared by the franchise's official Twitter handle. Kohli can be seen playing a variety of shots during a nets session with several audacious strokes, indicating the confidence levels of the RCB skipper. The 31-year-old looked charged up, as evident from the fist pump, following a hit after coming down the pitch. Kohli kept tracking the ball till the last second, before picking his bats and walking off, spelling the end of the video.

More intense, more hungry than ever before, and more balanced, Virat Kohli speaks about his progress after two weeks of practice in the UAE ahead of Dream 11 IPL 2020. pic.twitter.com/l2ovA1IgGf

The Team India skipper can further be seen elaborating on the process and difficulty involved in getting back to the thick of things, following the long break due to the coronavirus pandemic.

"Well obviously, the first few days, you are getting your eye in, getting back in the thick of things. After five months, it's a bit different, you try and get back into the frame of mind that you usually want to be in when you are competing. Takes a bit of time, so I think heading into these sessions now, where we are batting mostly in the middle with the hitting angles in the field, and understanding the pace of the wicket all those things. Very, very happy with how the team is shaping up," he said in the video.

Kohli also had words of praise for the RCB squad members, who he described as "looking great from the fitness point of view".

"A few shoulders were sore initially, because we threw after months and suddenly you realise, a few muscles are asleep. So, I think the guys are getting back into the intensity levels that we want. We don't want to push anyone into a niggle or an injury. We understand it's been a while away from the game. So, I think we have moved ahead in a balanced manner," he stated.

"We didn't want to be like a maniac, doing six sessions in six days. We gave ample off time to the boys which we will continue to do, along the course of these next few training sessions also. But yeah, from the fitness point of view, everyone's looking great, everyone's in good shape. It's a matter of feeling good and I think I have felt good from the first session onwards. Obviously, there are a few things which you try and rectify along the way, and once you reach your optimum mindset and you enter competition, you just want to stay in that as much as possible," concluded Kohli.