The players have started gathering at the various franchise headquarters as the stage is being set for the IPL 2020, beginning on March 29. 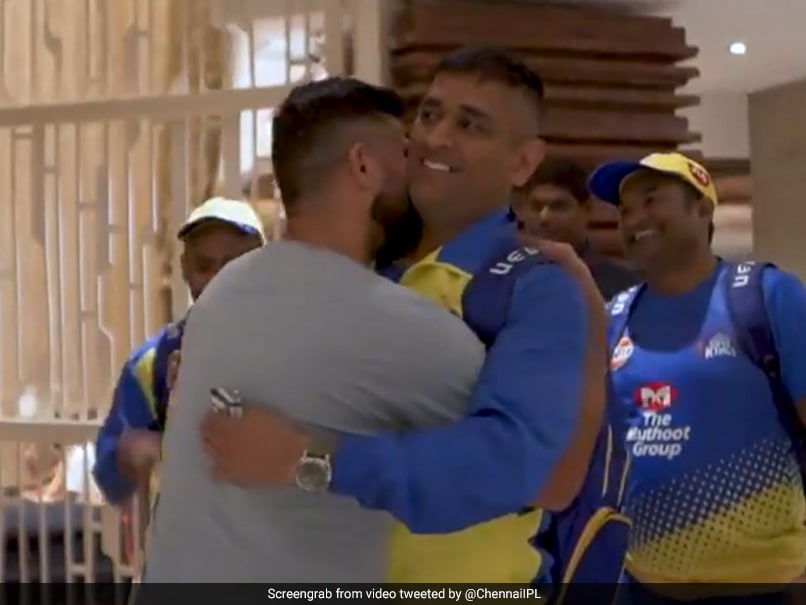 IPL 2020: Suresh Raina and MS Dhoni greeted each other with a warm hug.© Twitter

The legend of MS Dhoni continues to grow every day at Chennai Super Kings. Referred to as 'Thala' by the CSK fans, Dhoni enjoys a fan following in Chennai that borders on fanaticism. The 38-year-old has not represented the country since India's exit from the 50-over World Cup in England last year but received a hero's welcome after reaching Chennai as numerous players began their preparations for the start of IPL 2020. Chennai Super Kings' official Twitter handle on Tuesday, posted a video of MS Dhoni being greeted by teammate Suresh Raina.

The two have shared a close relationship, having been teammates in the Indian team as well as CSK for numerous years. So, it came as no surprise that Raina and Dhoni greeted each other with a warm hug but Raina went a step further and kissed Dhoni on his neck, sending CSK fans into a frenzy on Twitter.

Me3t and Gree7 - Everyday is Karthigai in our House, a film by Vikraman Sir. #StartTheWhistlespic.twitter.com/sJz77Nnakr

CSK fans were in euphoria after seeing the bonhomie between 'Thala and Chinna Thala' -- the names given to Dhoni and Raina by the CSK faithful.

Dhoni also got a rapturous welcome when he walked to the nets and began some batting practice.

Chennai Super Kings will start their campaign against defending champions Mumbai Indians at the Wankhede Stadium on March 29.

After Mumbai Indians, who have won four IPL trophies, CSK are the second most successful IPL side with three title wins.

Last year, they suffered a narrow defeat in the summit clash and would want to go all the way this season. CSK have retained their core group of players in their squad for the upcoming season.

In the auction, CSK spent big to avail the services of leg-spinner Piyush Chawla. Apart from Chawla, CSK have also brought in Josh Hazlewood and Tom Curran in the annual auction held in December last year.

MS Dhoni IPL 2020 Cricket
Get the latest updates on India vs South Africa and check out  Schedule, Results and Live Score. Like us on Facebook or follow us on Twitter for more sports updates. You can also download the NDTV Cricket app for Android or iOS.