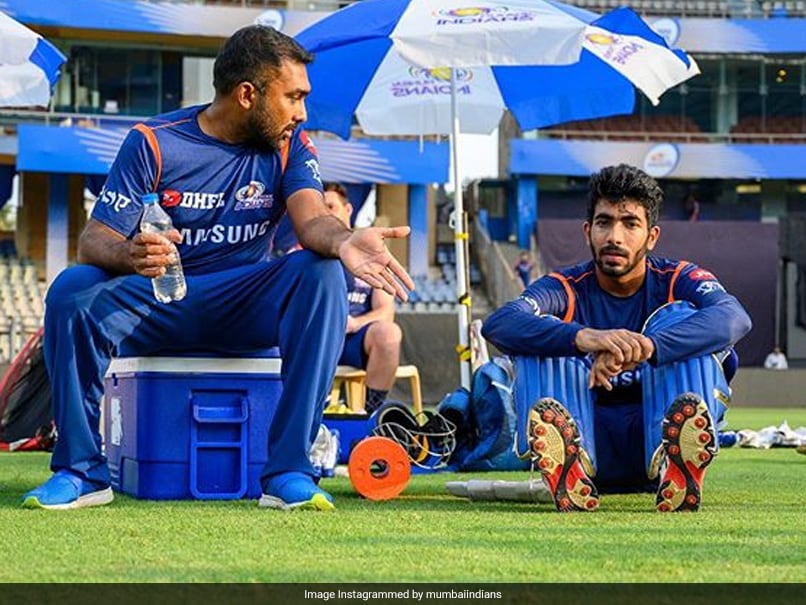 Jasprit Bumrah has not played competitive cricket since India's tour to the West Indies.© Instagram

Mumbai Indians head coach Mahela Jayawardene on Friday said Jasprit Bumrah's recovery from a back injury is well on track and he expects the Indian pace spearhead to feature in India's upcoming limited-overs home assignment against Sri Lanka or Australia, early next year. Bumrah, who recently bowled at the Indian team's nets, is nearly back to his full fitness having recovered from a stress fracture and the former Sri Lanka great feels the pacer can start playing by January (when Sri Lanka and Australia will be here) or latest by February.

Asked about Bumrah's progress, Jayawardane told reporters, "It's good. He (Bumrah) has started training. He was in Vizag (Visakhapatnam) bowling to the guys (Indian players). MI staff is closely monitoring his progress."

As long as Bumrah and Hardik Pandya (recovering from back surgery) start playing by January and February.

"Hardik (Pandya) is (also) making good progress...(I'm) quite happy, hopefully they will play the Sri Lankan series (early January), or may be the Australian series (although) I am not sure how quickly they will be coming through," Jayawardane said at the '7th Pro-Am Golf Championship', a fund-raising event organised by The Golf Foundation at the Willingdon Sports Club in Mahalaxmi.

"It (all) depends on the medical staff, but as long as they are playing in January- February, it's fine," he added.

While injuries are part and parcel, Jayawardene reiterated that Bumrah is "more valuable" for the national team than Mumbai Indians. "

Injuries happen and it is about how best they recover and these two (Hardik and Bumrah), I guess more than for Mumbai Indians, they are more valuable for Indian national team.

"It is important we manage all that.. (I'm) quite happy and everything is going right for us," the former Sri Lankan skipper added.

Bumrah is recovering from a back injury and bowled to the Indian team-mates ahead of the second ODI in Visakhapatnam.

Pandya, on the other hand, who successfully underwent a back surgery in London, is training at the MCA facility in suburban Bandra-Kurla complex.

Jayawardene was also effusive in his praise for the Indian pace spearhead, who is also the leading bowler for MI.

Bumrah has picked 82 wickets from 77 matches for the four-time IPL champions. However Jayawardene doesn't want to put too much pressure on Bumrah alone.

"I mean, that is always going to happen, but we don't put lot of pressure on Jasprit, saying that he has to be (always there). We have created a very good bowling unit around him (but) he delivers."

The batting star of yesteryears feels that Bumrah has a lot more to offer.

"You have to realize he is still young - Jasprit - so there is lot more to come from him. He is brilliant, he is learning -- every day he is evolving (which) is great.

"We want to create a complete unit, put lot of emphasis on our bowling. Over the last few years the bowling unit has performed really well under pressure, some close matches we won, both (the) finals... defended low scores. We are trying to create that culture and Jasprit is part of that," added the Sri Lankan great.

"We asked a lot of players to be flexible in their roles especially in T20, there are no fixed roles. We have a great combination in Quinton (De Kock) and Rohit (Sharma), they were brilliant last year. Lynn will bring something different, it all depends on how we want to use that."

Meanwhile, Sri Lanka are touring Pakistan after the 10 years after the terror attack on their national team and Jayawardene said, "Sports is something that unites things and people have to move on."