Delhi Capitals and SunRisers Hyderabad showed off some social media camaraderie as the two teams flew out of Mumbai to the UAE on Sunday. 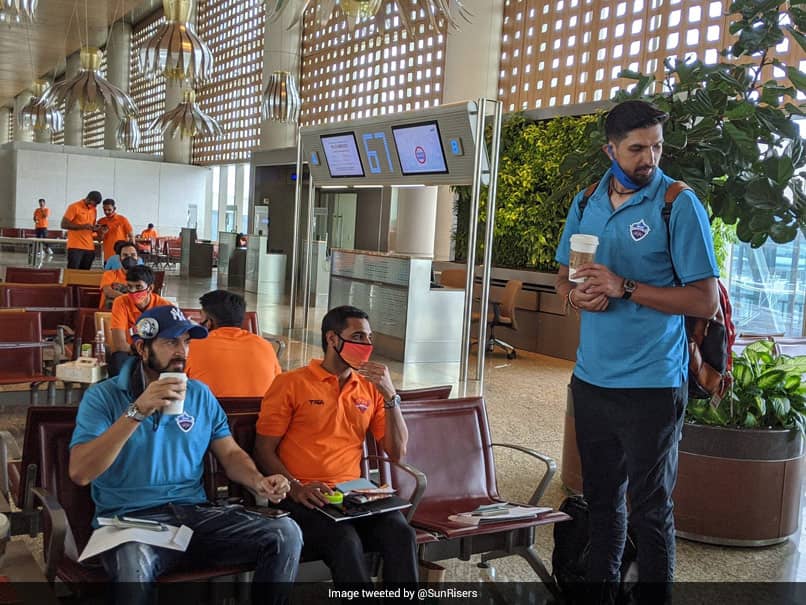 Delhi Capitals and SunRisers Hyderabad players spent some time together at the Mumbai airport.© Twitter

Delhi Capitals (DC) and SunRisers Hyderabad (SRH) were the last two franchises to fly out of India to the United Arab Emirates (UAE) for the 2020 season of the Indian Premier League (IPL). The two teams flew out of the Mumbai airport earlier on Sunday, and of course, the players of both teams used the waiting time ahead of their flight to mingle with each other. The two franchises also got on to social media to show off their camaraderie, although that may not last post September 19, when the cash-rich league gets underway.

"Hey, @delhicapitals Seems like we are travel buddies," the Hyderabad-based team tweeted, along with a photo of players of both teams at the airport, including Delhi's Ishant Sharma and SRH's Bhuvneshwar Kumar.

Responding to the tweet, the Capitals wrote "We got some great company on the flight, @SunRisers."

We got some great company on the flight, @SunRisers #Dream11IPL https://t.co/dGl067pyH4

The teams had earlier shared videos of their respective contingents arriving at the Mumbai airport ahead of their flight.

"Arrived at the Mumbai Airport," Delhi Capitals captioned their post.

"How does it feel to see the boys back in? PS: Watch out for @manishpandeyinsta's cameo," SunRisers Hyderabad wrote along with a video of their players at the airport.

The IPL 2020 is set to get underway on September 19, when defending champions Mumbai Indians take on Chennai Super Kings in the opening match.

The tournament, postponed from the originally planned start in late March due to the coronavirus pandemic, has been shifted to the UAE due to the rising number of COVID-19 cases in India.

The UAE has previous experience hosting the IPL as well, as the tournament was partially held there in 2014 due to general elections in India.

Bhuvneshwar Kumar Cricket
Get the latest updates on IPL 2020, check out the IPL Schedule for 2020 and Indian Premier League (IPL) Cricket live score . Like us on Facebook or follow us on Twitter for more sports updates. You can also download the NDTV Cricket app for Android or iOS.