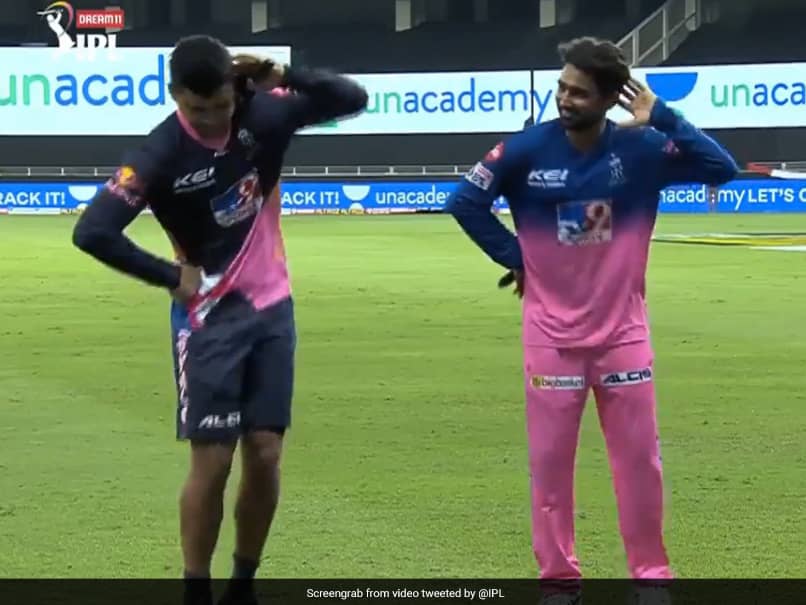 IPL 2020, SRH vs RR: Riyan Parag performed a Bihu dance move after leading his side to a win© Twitter

Riyan Parag, an 18-year-old Assam cricketer, wrapped up Rajasthan Royals' (RR) win against SunRisers Hyderabad (SRH) on a celebratory note, with a smashing six and a groovy Bihu twirl. RR defeated SRH by five wickets in an exciting encounter, in their Indian Premier League (IPL) 2020 fixture at the Sharjah Cricket Stadium, in United Arab Emirates (UAE). SRH had set a 159-run target, which RR had to chase. Things didn't start well for RR, who lost crucial wickets. Parag and Rahul Tewatia built a crucial unbeaten 85-run partnership from the 12th over onwards. After the match, Parag gave a crash course to Tewatia, teaching him a basic move of the traditional Assamese dance. Here is the video:

Riyan Parag teaching Tewatia the Bihu dance is just one part of this chat. Watch the full interview as the duo decode their match-winning partnership against #SRH.

In the video, Parag explained that he was motivated to do the dance due to the net bowlers who were also present in the stadium. He revealed that some of them were from Assam, and were cheering for him. "They were there. So, for them, I did it in the heat of the moment," he quipped.

The youngster had performed the dance during last season too.

Parag scored an unbeaten knock of 42 runs off 26 deliveries. It was also packed with two fours and two sixes.

After the win, RR are currently sixth in the league table after seven matches. They have won three fixtures, and lost two. Meanwhile, SRH are fifth after seven games. They have registered three victories and four losses.

In their next match, Steve Smith's side face Delhi Capitals on October 14. SRH face Chennai Super Kings (CSK) on September 13.

Rajasthan Royals Sunrisers Hyderabad vs Rajasthan Royals, Match 26 IPL 2020 Cricket
Get the latest updates on IPL 2021, IPL Points Table , IPL Schedule 2021 , live score . Like us on Facebook or follow us on Twitter for more sports updates. You can also download the NDTV Cricket app for Android or iOS.