MS Dhoni and his family can be seen playing with their dog Sam in a video shared by Chennai Super Kings. 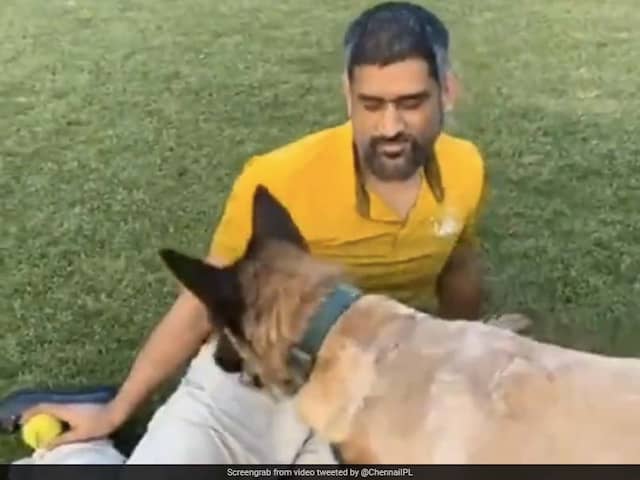 MS Dhoni was seen having relaxing on his lawn with Sakshi, Ziva and their dog Sam.© Twitter

In an adorable video shared by Chennai Super Kings, MS Dhoni, his wife Sakshi Singh Dhoni and their daughter Ziva Dhoni can be seen playing with their dog, Sam, at the former India captain's Ranchi farmhouse, where they are staying amid the coronavirus-enforced lockdown. In the video, the wicketkeeper-batsman is seen throwing a tennis ball for Sam to catch, but he refuses to budge. "See, he won't listen to you till I'm there," Sakshi, who recorded the video, is heard saying.

She then makes Sam sit, and then throws the ball at him, which he duly catches.

Ziva too joins in and when Sakshi throws the ball again, this time much higher and further away, Sam runs after it an almost pulls off a stunning catch, jumping high in the air.

Dhoni is seen in his salt-and-pepper beard, which sent Twitter into a frenzy.

Sakshi can also be heard telling MS Dhoni that their lawn needs to be mowed, as Ziva plays with their dog.

As the video progresses, Sam is seen finally sitting with Dhoni and taking the ball from him after the wicketkeeper-batsman tries to hide it from him.

Dhoni, 38, has not appeared for club or country since last year's 50-over World Cup and the coronavirus lockdown in the country could threaten his chances of getting back into the national team.

Chennai Super Kings IPL 2020 Cricket
Get the latest Cricket news, check out the India cricket schedule, Cricket live score . Like us on Facebook or follow us on Twitter for more sports updates. You can also download the NDTV Cricket app for Android or iOS.