MS Dhoni, who has rarely been sighted in recent times, was seen sporting a bearded look that sent social media into a tizzy. 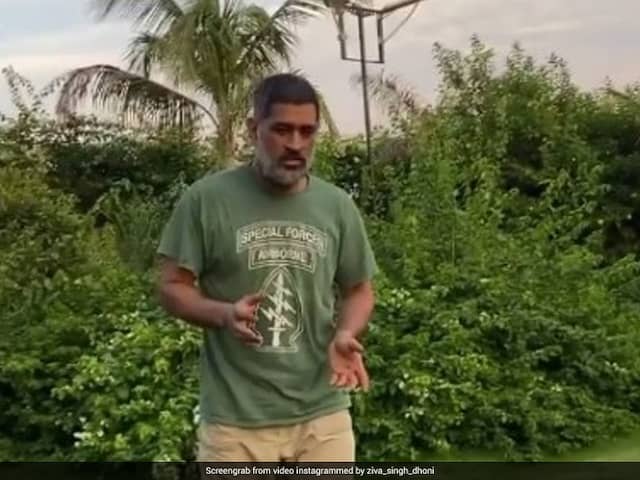 While many Indian cricketers have been on a social media spree during the ongoing nationwide lockdown due to the coronavirus pandemic, former India captain MS Dhoni has rarely made an appearance. The little glimpses that fans have got of Dhoni have been largely thanks to his wife Sakshi. Other than that, the much-loved Indian cricketer has been a rare sighting. However, fans and other social media users were in for a surprise when Dhoni was sighted, sporting a salt-and-pepper beard in Ziva Dhoni's Instagram video.

In the video, Dhoni is seen spending some quality time with his daughter and while Ziva is the main protagonist, India's World Cup-winning skipper's brief appearance soon became the talk of the town on social media.

Fans went gaga after getting a glimpse of Dhoni's bearded look.

Somewhere between his long coloured hairs to his grey hair & beard, we all grew up @msdhoni <3 #idol pic.twitter.com/n6W1jRmy2U

Dhoni before lockdown vs after lockdown
March month he arrived Chennai with a fresh look & we would hve seen him in #Yellove now
But corona had other idea
& Ruined everythingpic.twitter.com/EMyoSSFuPd

How the men looks after carrying the entire burden and blame for past 10 years..! This pic is very emotional msdians.. # pic.twitter.com/YrlW3Lqp9z

Pic Of The Day

Dhoni, 38, has not appeared for club or country since last year's 50-over World Cup and the coronavirus lockdown in the country could threaten his chances of getting back into the national team.

There has been speculation that Dhoni might retire from international cricket.

Harbhajan Singh, who plays with Dhoni at IPL side Chennai Super Kings, said international retirement was on the cards for him and that he was increasingly being asked about his teammate.

"It's up to him. You need to know whether he wants to play for India again," Harbhajan had said.

"As far as I know him, he won't want to wear India's blue jersey again. IPL he will play, but for India I think he had decided the (2019) World Cup was his last."

Despite all the mystery surrounding his retirement, the Indian superstar, who gave up Test cricket in 2014, has not commented on his international future.