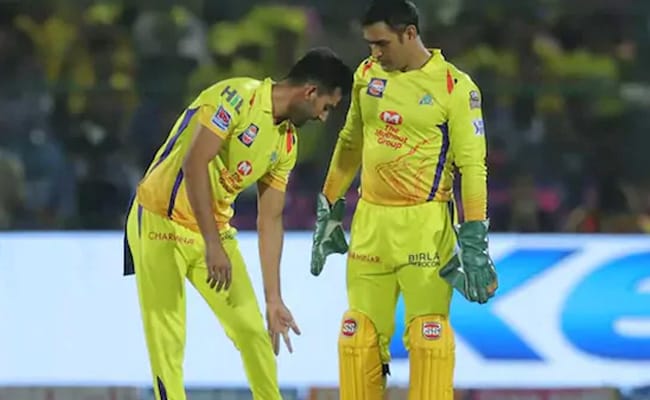 Deepak Chahar has been instrumental to Chennai Super Kings' success ever since he joined the team ahead of Indian Premier League 2018. Used by captain MS Dhoni to bowl overs in the Powerplay, given Chahar's ability to swing the ball both ways, the pacer has emerged as vital part of CSK's bowling template. However, Chahar wanted to bowl at the death, too, especially after ramping up his pace from the mid-130s to 140s and once walked up to Dhoni to ask him why he hasn't been utilized in the death overs. “I groom youngsters” was Dhoni's reply, as Chahar told former India opener Aakash Chopra in the latter's show, Aakash Vani. Chahar was left speechless by Dhoni's answer.

“So I asked the bowling coach why I wasn't being used at the death and the coach said I should be given the ball in death overs.

“Then one day I gathered the courage to ask Mahi bhai.He was sitting in his room and I asked him ‘why don't you bowl me with the older ball?'

“He gave me a two-word answer: ‘I groom players.' He said nothing more,” Chahar recalled.

Chahar picked up 22 wickets from 17 matches for Chennai last season at an economy rate of 7.63 runs per over. Overall, he has 33 wickets from 34 IPL matches.

MS Dhoni Deepak Chahar IPL 2020 Cricket
Get the latest updates on India vs South Africa and check out  Schedule, Results and Live Score. Like us on Facebook or follow us on Twitter for more sports updates. You can also download the NDTV Cricket app for Android or iOS.