KXIP vs SRH: Preity Zinta was seen cheering the team on from the stands in Dubai as Kings XI Punjab defended the lowest total in this year's IPL on Saturday. 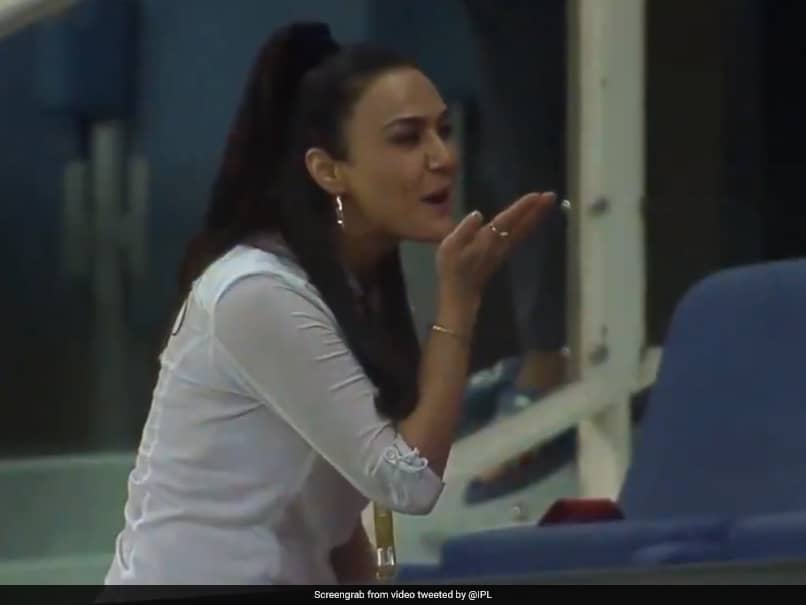 KXIP vs SRH: Kings XI Punjab co-owner Preity Zinta was cheering the team from the stands in Dubai.© Twitter

Kings XI Punjab bowlers came to the party against SunRisers Hyderabad and managed to defend the lowest total in this year's Indian Premier League 2020. Defending a paltry total of 126, Arshdeep Singh and Chris Jordan picked up three wickets apiece to bowl out SRH for 114, handing KXIP a 12-run win on Saturday. After the win, KXIP's co-owner Preity Zinta was seen cheering her franchise from the stands and she blew a kiss to the team that instantly went viral on Twitter.

What a victory this for @lionsdenkxip. Four wins in a row for them.

After KXIP's win over SRH, IPL's official Twitter handle posted a video of Punjab's celebration and in the video, Preity Zinta can be seen blowing a kiss to the team after they registered their fourth successive win in the ongoing T20 tournament.

Preity Zinta's reactions are the best, always always so fascinating to watch

"Preity Zinta's reactions are the best, always always so fascinating to watch," a user tweeted.

In the match, SRH skipper David Warner won the toss and invited KXIP to bat.

None of the Punjab batsmen got going except KL Rahul (27) and Nicholas Pooran who remained unbeaten on 32.

Rashid Khan, Sandeep Sharma and Jason Holder all picked up three wickets each to restrict KXIP to 126/7 from their allotted 20 overs.

Warner and Bairstow got SRH off to a flying start, adding 52 runs in the powerplay.

Ravi Bishnoi removed Warner and then the SRH batting lineup fell like a pack of cards. SRH's innings was folded for 114 in the last over.

Chris Jordan Rashid Khan Kings XI Punjab vs Sunrisers Hyderabad, Match 43 Cricket
Get the latest updates on IPL 2021, IPL Points Table , IPL Schedule 2021 , live score . Like us on Facebook or follow us on Twitter for more sports updates. You can also download the NDTV Cricket app for Android or iOS.