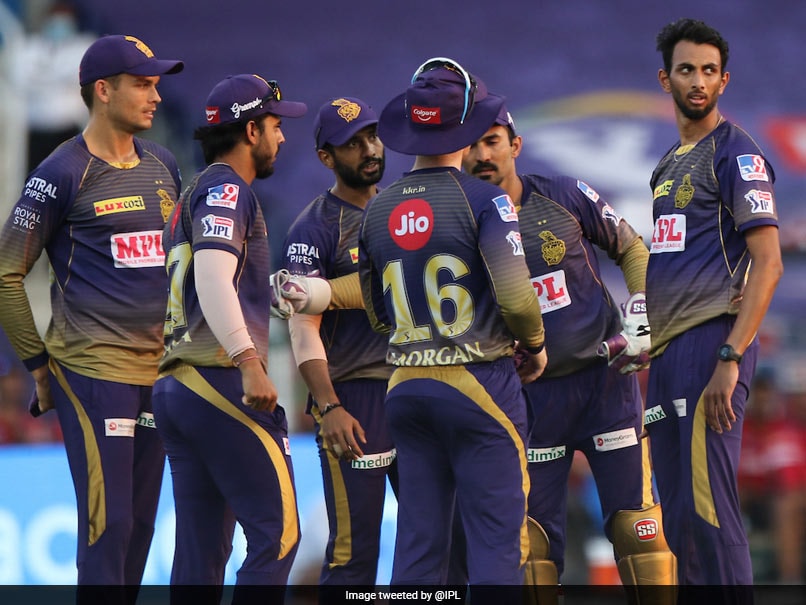 KXIP vs KKR IPL 2020: KKR bowlers held their nerves in crunch situation as they beat KXIP by 2 runs.© BCCI/IPL

Kings XI Punjab crumbled once again in a close game as Kolkata Knight Riders beat them by two runs, handing them their fifth consecutive defeat this season. KXIP's over-reliance on their openers came to haunt them once again. After a century-stand between Mayank Agarwal and KL Rahul had put them in a commanding position, other KXIP batters failed to put the game to bed. The credit also goes to KKR skipper Dinesh Karthik whose smart bowling changes, despite being one bowler short, took the game deep, activating the panic button among KXIP's inexperienced middle-order. With 14 needed off the last over, Sunil Narine bowled brilliantly to hand his side another win. Earlier, Dinesh Karthik led from front, scoring 58 off 29 balls, as KKR posted 164/6 in their 20 overs. Opener Shubman Gill continued with his good run this season and held the KKR innings together scoring 57 off 47 balls. Eoin Morgan, promoted up the order to bat at No. 4., also played a handy knock. At the start of the innings, Kings XI Punjab bowlers pushed KKR on the backfoot and restricted them to 25/2 -- the second lowest score inside powerplay in IPL 2020. After opting to bat, KKR found it tough against KXIP new ball bowlers, especially Shami and Arshdeep Singh, who bowled tight lines and caused them a lot of trouble. Shami cleaned up Rahul Tripathi to give Kings XI Punjab the first breakthrough. KKR suffered another major blow in the very next over when a huge mix-up resulted in the departure of Nitish Rana. Young medium pacer Arshdeep Singh was the most economical among the lot inside the Powerplay, conceding just two runs in his two-over spell. Morgan combined with Shubman Gill and put on a crucial partnership to get their innings back on track. However, just when things were looking good for them, Ravi Bishnoi got rid of Englishman to hand KKR a major blow. However, from there on it was a one-man show as Dinesh Karthik played like a true leader and guided his side to a fighting total, which in the end proved good enough to hand them two more points. (SCORECARD)

Sheikh Zayed Stadium, Abu Dhabi IPL 2020 Cricket Kings XI Punjab vs Kolkata Knight Riders, Match 24 Live Score Live Cricket Score Live Blogs
Get the latest updates on India vs South Africa and check out  Schedule, Results and Live Score. Like us on Facebook or follow us on Twitter for more sports updates. You can also download the NDTV Cricket app for Android or iOS.