IPL 2020, SunRisers Hyderabad vs Royal Challengers Bangalore: Players To Watch Out For

SunRisers Hyderabad vs Royal Challengers Bangalore: The SRH vs RCB IPL 2020 clash pits some of the biggest names in world cricket against each other. 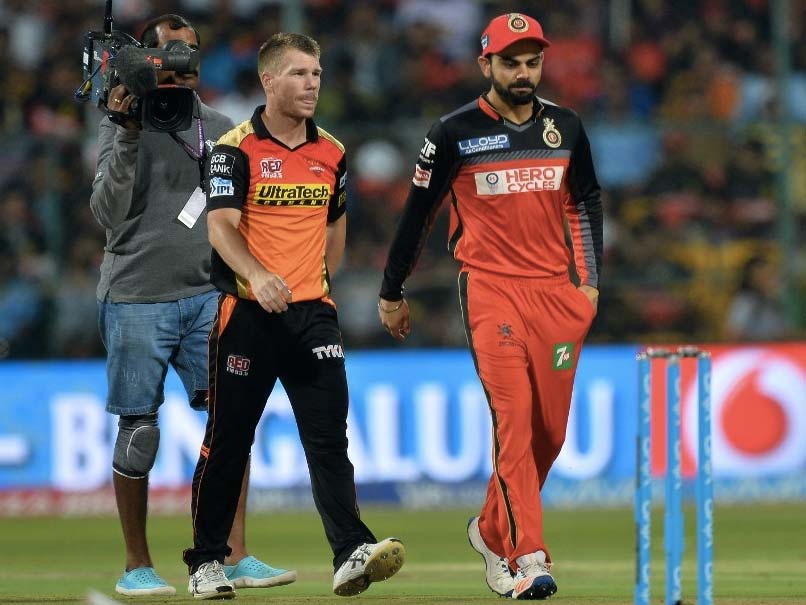 Two days into Indian Premier League (IPL) 2020 and the tournament has already seen some thrilling action, including a Super Over. Now, it's the turn of SunRisers Hyderabad and Royal Challengers Bangalore (RCB), two of the best-followed teams, to take centrestage. The matchup also pits some of the best players in the world against each other, and the class in both teams just oozes out. The likes of Virat Kohli, AB de Villiers, David Warner, Kane Williamson and Jonny Bairstow will all be seen in action for the first time in IPL 2020, and fans will be glued to their TV sets to see how they fare.

David Warner: The Australian dasher is back at the helm of affairs for SunRisers Hyderabad and will look to lead from the front. Warner along with England's Jonny Bairstow formed a formidable opening duo last time around, and this season could be no different.

With a total of 4,706 runs, Warner has been one of the most consistent performers in the IPL. He has not averaged below 40 in the last five editions that he has been a part of and he will hope to continue his sensational run with the bat.

Kane Williamson: There is little doubt that the New Zealand skipper is one of the best batsmen in world cricket when it comes to Test and ODI cricket. But Williamson has proved that he is a force to be reckoned with in the shortest format of the game as well.

Having averaged 42.66 and 52.50 in the 2017 and 2018 editions, respectively, Williamson was overshadowed by Warner and Bairstow last season. On slower pitches in the UAE, where shot-making might not be so easy, Williamson's class could very well be the difference.

Rashid Khan: Few spinners in the world have had the impact that the Afghan sensation has had on the T20 game in recent times. An absolute master of his art, Rashid is one of the most difficult bowlers to get away in this format. To go with his mind-blowing economy rate (6.55), Rashid's wicket-taking abilities are right up there as well.

Pitches in the UAE, could be the perfect playground for Rashid Khan to weave his magic. Add to that his unique batting style, and the Afghan is surely among the first names on the team sheet for SRH.

Virat Kohli: The Indian captain, and the darling of Bangalore will finally be seen in action after a lengthy coronavirus-enforced break. Virat Kohli's boundless energy is unparalleled and the RCB skipper will be itching to put down an early marker on a tournament that has been a mixed bag for him.

Despite his brilliance with the bat, Virat Kohli has not managed to get his hands on the IPL trophy but this time there seems to be a quiet confidence in the team. Kohli will be looking to repeat his heroics from 2016 when he blasted 973 runs, including four centuries.

AB de Villiers: A year older, but still fit as a fiddle, the South African great has been an integral part of RCB over the years. De Villiers along with Kohli have formed a deadly combo but despite these two greats smashing bowlers to all parts of the ground, RCB have been let down in other departments of the game.

In the last two seasons, De Villiers has been brilliant and without the burden of international cricket, the South African could once again be RCB's game-changer with the bat.

Yuzvendra Chahal: The wily leg-spinner has been a part of the RCB set-up since 2014 and has become a fan favourite thanks to his antics on and off the field. Chahal has come for some stick, especially due to the fact that RCB's home ground has been a death bed for bowlers. However, the tournament shifting to the UAE, could very well play into Chahal's hands.

The 30-year-old who took 18 wickets last season, will be looking to take it a step further and spin RCB to their maiden title.

Kane Williamson Rashid Khan IPL 2020 Sunrisers Hyderabad vs Royal Challengers Bangalore, Match 3 Cricket
Get the latest updates on India vs South Africa and check out  Schedule, Results and Live Score. Like us on Facebook or follow us on Twitter for more sports updates. You can also download the NDTV Cricket app for Android or iOS.