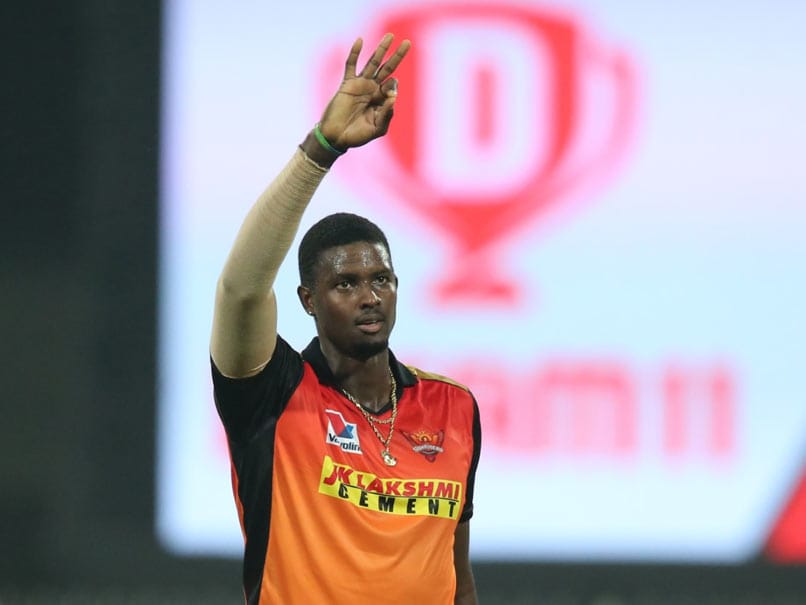 SunRisers Hyderabad (SRH) fighting for their survival in the Indian Premier League (IPL) 2020 put on another complete show as they defeated Royal Challengers Bangalore (RCB) by five wickets at the Sharjah Cricket Stadium on Saturday to remain in the playoff race. Bowling first, SRH restricted Virat Kohli's side to a below par total of 120/7 and then achieved the target off just 14.1 overs. Jason Holder emerged as the star for SRH with both the bat and ball. After an impressive bowling spell where he picked up 2/27 from his four overs, he followed it up with a quick-fire 26 off just 10 balls, to take his side over the line. He finished things off in style by smashing a short delivery from Yuzvendra Chahal over long-on fence for a maximum.

Chasing a modest total, SRH lost skipper David Warner early who fell to Washington Sundar in the second over. However, Wriddhiman Saha and Manish Pandey stitched a crucial half-century stand for to provide them some stability. RCB leg-spinner Yuzvendra Chahal broke partnership as he removed Manish Pandey in his first over.

Saha batted with great maturity and scored 39 off 32 balls. With SRH in firm control, RCB bowlers took three wickets in quick succession to give their side some hope. Holder showed great aggression and smashed three sixes in his 10-ball knock as SRH registered a comfortable victory, pulling themselves from seventh spot to the top-half of the table.

Chahal and Isuru Udana bowled economical spells to pull things for RCB but they didn't have enough runs on the board to defend. Chahal returned with figures of 2/19 from 3.1 over, while Udana picked up a wicket conceding 20 runs in his three overs.

In a must-win game, SRH skipper David Warner won the toss and elected to bowl on a slow Sharjah track.

RCB lost their in-form opener Devdutt Padikkal cheaply as he was cleaned up by Sandeep Sharma for five runs. RCB suffered another huge blow inside the Powerplay as they lost their skipper Virat Kohli for just seven runs. He was caught at short cover by Kane Williamson off Sandeep's bowling.

AB de Villiers (24 off 24 balls) and Josh Phillipe (32 off 31 balls) added crucial 43 runs to rebuild their innings. However, both the batters got out in quick succession, leaving RCB in a deep state of trouble.

Washington Sundar (21) and Gurkeerat Singh Mann (15) added some crucial runs down the order but RCB could fell way short of a challenging total.

Apart from Holder, Sandeep Sharma was the standout performer for SRH as he returned figures of 2/20, while T Natarajan,  Shahbaz Nadeem and Rashid Khan took three wickets among them.

RCB will face Delhi Capitalsin a virtual quarter-final at the Sheikh Zayed Stadium, Abu Dhabi on November 2, with winner advancing to the playoffs.

With this win SRH jumped to the fourth spot in the IPL 2020 Points Table, courtesy their healthy net run-rate. They are equal on points with three other franchises Kings XI Punjab, Rajasthan Royals and Kolkata Knight Riders who are still in the playoff race.

SunRisers Hyderabad will take on defending champions Mumbai Indians in their last league game of the season in Sharjah on November 3.

Isuru Udana Royal Challengers Bangalore vs Sunrisers Hyderabad, Match 52
Get the latest updates on ICC T20 Worldcup 2022 and CWG 2022 check out the Schedule, Live Score and Medals Tally. Like us on Facebook or follow us on Twitter for more sports updates. You can also download the NDTV Cricket app for Android or iOS.