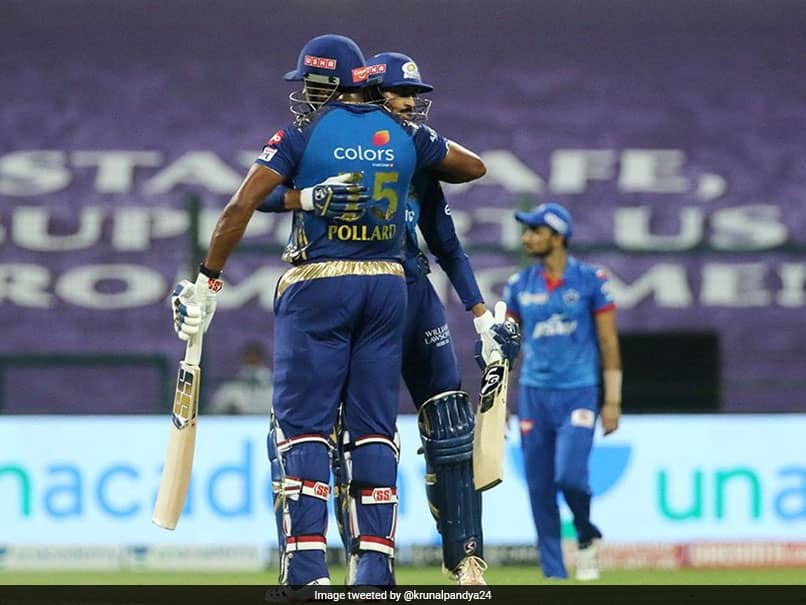 IPL Points Table: MI go to the top of the points table with comfortable win over DC.© Twitter

Rajasthan Royals secured a thrilling win over SunRisers Hyderabad at the Dubai International Stadium on Sunday to end their four-match-long losing streak and climb to sixth place on the Indian Premier League (IPL) 2020 points table. In the second match of the day, Mumbai Indians outclassed Delhi Capitals by five wickets in the battle of the top two teams at the Sheikh Zayed Stadium in Abu Dhabi. With the win, Mumbai Indians jumped to the top of the table while Delhi Capitals slid to second place.

Kings XI Punjab, who suffered a heartbreaking loss against Kolkata Knight Riders (KKR) on Saturday, stay at the bottom of the table while RR's win saw Chennai Super Kings move down to seventh spot.

SRH, after losing to RR, stay at fifth place on the table while KKR and RCB keep the third and fourth spot respectively.

Kagiso Rabada, the leading wicket taker in the ongoing tournament, added two more wickets to his tally to keep the Purple Cap. He now has 17 wickets from seven games.

Bumrah, who is second in race for Purple Cap, went wicketless while his teammate Trent Boult, the third highest wicket taker this season, picked up a wicket to take his tally to 11 wickets.

In the first game of the day, Jofra Archer picked up a wicket to move to sixth place. He has nine wickets from seven games.

KL Rahul still has the Orange cap with 387 runs from seven games. His teammate Mayank Agarwal is second on the list with 337 runs after seven matches.

David Warner scored 48 runs against RR and is at fourth spot with 275 runs to his name so far in the tournament.

Trent Boult IPL 2020 Mumbai Indians vs Delhi Capitals, Match 27 Cricket
Get the latest updates on IPL 2021, IPL Points Table , IPL Schedule 2021 , live score . Like us on Facebook or follow us on Twitter for more sports updates. You can also download the NDTV Cricket app for Android or iOS.