Contact-tracing electronic badges need to be worn by all players, officials and families and the data collected will be sent to the BCCI. 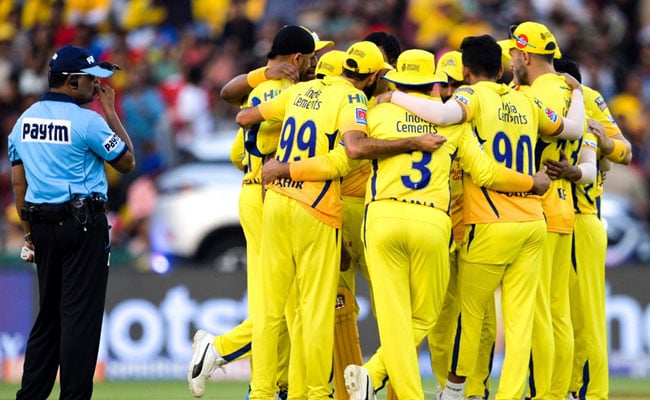 Two players from Chennai Super Kings had tested positive for the coronavirus.© AFP

The Board of Control for Cricket in India (BCCI) is leaving no stones unturned to help the Indian Premier League (IPL) teams fight the COVID-19 situation and stay safe as they gear up for edition 13. In this very effort, the BCCI has handed contact tracing electronic badges to all teams that have to be worn not just by the players or support staff, but also the family members who are currently in the UAE.

Speaking to ANI, a franchise official said that all teams have been handed small badges the size of whistles that need to be worn by everyone in and around the teams and the bluetooth-enabled badges will help in contact tracing and the data collected will go directly to the BCCI.

"The BCCI has put in place a robust system which sees not just the players, but also the support staff, officials and family members travelling with them wearing these BEEKs badges which will give the board a detailed report on who all we are coming in contact with by using data on movement and interaction. This actually helps if someone unfortunately turns positive as those in danger can be easily traced," the franchise official explained.

"While one can open the badge when inside the room, it needs to be worn at all times when outside the designated rooms. Also, it can be opened when the players enter the field of play," the official added.

Commending the efforts put in by the BCCI in these difficult times, another franchise official said that a Health App has also been given to every travelling member wherein all the individuals need to do is check the daily temperature and log it.

"The health app is brilliant and moreover, it can pre-empt if your body is vulnerable to some foreign body or if you are at a health risk. That way, you can keep a tab on how you manage your activities. All you need to do is check your temperature and log it on the application. The rest is taken care of by the app," the official pointed.

Another franchise official pointed how there was a webinar organised by the board with all the eight franchises to not only educate them about the protocols, but also clear any doubts the teams might have with regards to the Standard Operating Procedure (SOP).

"After coming in, we had a webinar wherein a team from BCCI helped all the franchises once again go through the dos and don'ts," the official said.

"We already had the SOP given by the board, but they asked us if we had any further queries post landing and some of the doubts we had even after going through the SOP were cleared in that webinar.

"The diktat is very clear and all the BCCI wants the teams to do is focus on the cricket while the professional team of the BCCI and the Emirates Cricket Board takes care of the COVID situation," the official highlighted.

Comments
Topics mentioned in this article
IPL 2020 Cricket
Get the latest updates on ICC T20 Worldcup 2022, check out the Schedule and Live Score. Like us on Facebook or follow us on Twitter for more sports updates. You can also download the NDTV Cricket app for Android or iOS.