IPL 2020, MI vs RR: Mumbai Indians climbed to the top of the table after defeating Rajasthan Royals, at the Sheikh Zayed Stadium, in Abu Dhabi. 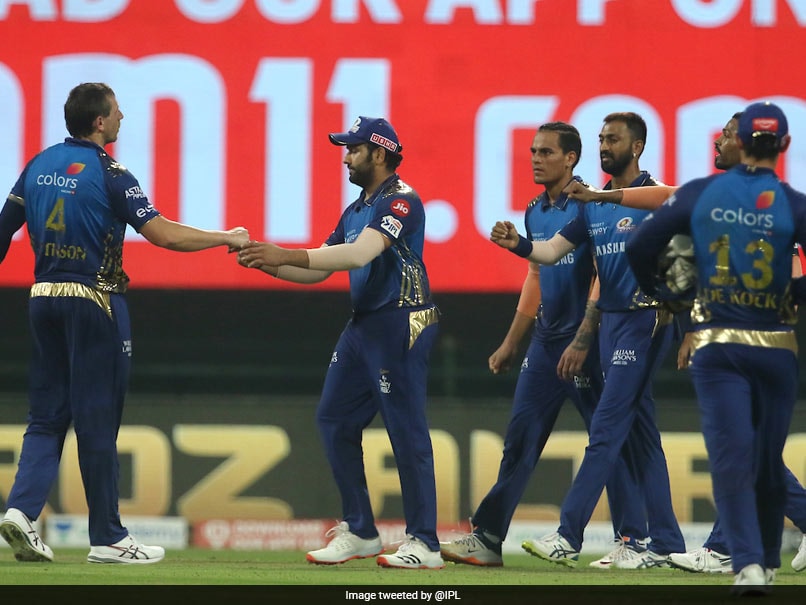 IPL 2020, MI vs RR: Mumbai Indians celebrate the dismissal of a wicket© Twitter

Mumbai Indians (MI) defeated Rajasthan Royals (RR) by 57 runs in their Indian Premier League (IPL) 2020 fixture, at the Sheikh Zayed Stadium, in Abu Dhabi. After the match during the post-match press conference, MI captain Rohit Sharma hailed his team's quality. "We have a lot of quality and it's about getting the job done. They all have a lot of confidence. They're all talented and they can take the game away on their day and it's all falling into place," said the Indian cricketer.

MI are currently in good form, having stitched together a hat-trick of wins.

Rohit also praised his bowlers, who powered past RR with style. Jasprit Bumrah i,n particular, shone as he grabbed his first four-wicket haul in T20 cricket.

"It's good to have bowlers who can exploit the conditions", Rohit quipped.

MI initially won the toss and elected to bat. Suryakumar Yadav shone for his team with an unbeaten 79-run knock off 47 deliveries. It was packed with 11 fours and two sixes. His power-packed display helped MI wrap up at 193/4 after 20 overs, setting a 194-run target for RR.

Hailing him, Rohit said, "A good Surya innings was coming, I spoke to him before the game, and his shot selection was perfect today. We wanted him to bat till the end because he can innovate rather well."

Losing captain Steve Smith lamented his team's display. Criticising his team, he said, "I think losing wickets early doesn't help, we haven't been able to get off to a good start in the last three games".

After the win, MI are now on top of the IPL table after six matches, having played a game extra than rest of the teams. Meanwhile, RR are seventh in the eight-team table.

MI face Delhi Capitals (DC) in their next match on October 11. Meanwhile, RR face the same opposition on October 9.

Steven Smith Mumbai Indians vs Rajasthan Royals, Match 20 Cricket
Get the latest updates on IPL 2021, check out the IPL 2021 Schedule and Indian Premier League Live Score . Like us on Facebook or follow us on Twitter for more sports updates. You can also download the NDTV Cricket app for Android or iOS.